Ugo Zagato (he was born in Gavello, near Rovigo, on June 25, 1890) began his coachbuilding career in 1919 when he left Officine Aeronautiche Pomilio to set up his own business in Milan. This was: “the construction and repair of bodies for automobiles and airplanes”. He did so with the intent of transferring sophisticated constructional techniques that combined lightness with strength from the aeronautics to the automotive sector. Cars of the time were still bulky and heavy: Ugo Zagato conceived them as lightweight structures, with a frame in sheet aluminium similar to an aircraft fuselage. This change in direction came to represent a fundamental chapter in the history of taste and saw, in Europe, the adoption of the concept of functionalism applied to automotive design.

During the 20s Ugo Zagato decided to concentrate on racing cars. In the beginning of the decade he was asked by Alfa Romeo to dress some Alfa Romeo RLs. But in 1925 Vittorio Jano, Alfa Romeo’s Chief Engineer, asked him to create a body for the Alfa 6C 1500, the Alfa Romeo P2’s heir, which should have been light and fast. Ugo Zagato, using his Aeronautics culture which meant slight and light bodies, succeeded in creating a sleek and light body for the car. It scored a 2nd place OA at the 1927 Mille Miglia and it won the 1928 edition. 6C 1500’s technical qualities were improved also on the Alfa Romeo 6C 1750, which was introduced in 1927. It was bodied in several versions (Turismo, Sport or Granturismo, Super Sport or Gran Sport) and achieved overall victories in the Mille Miglia in 1929 (Campari-Ramponi) and 1930 (Tazio Nuvolari, Achille Varzi, Giuseppe Campari and Pietro Ghersi filled the first four places). Enzo Ferrari started his career at Alfa Romeo in 1929 when founded Scuderia Ferrari as the official team for race Alfas. Also Bugatti, Maserati, Diatto, OM and even Rolls-Royce were client of Zagato since the very beginning.

During this decades, Ugo Zagato received several requests. The name Zagato consolidated his fame as a very well known supplier for racing bodies. As a matter of fact, 36 Zagato bodied cars were at the start of 1938 Mille Miglia. A constant preoccupation during the 1930s to get cars to cut through the air with sleek tapering lines led Ugo Zagato to refine and develop the earliest concepts of aerodynamics applied to the motor car. He adopted inclined windscreens, more aerodynamic headlights, firstly enclosing them in aluminium hemispheres and then incorporating them within the bodywork, convex bootlids and perforated disc wheels that favoured brake cooling.

At the outbreak of the Second World War, Ugo Zagato escaped from Milan and sought refugee at Lake Maggiore. On 13 August 1943 a devastating RAF bombing raid completely destroyed his coachworks in Corso Sempione road. He found new premises at Saronno, alongside the Isotta Fraschini works, on behalf of which he constructed trucks and military vehicles and a futuristic Monterosa. He returned to Milan at the end of the war and re-established his company, close to Alfa Romeo historic home: Portello. His innovation were oriented towards a search for more spacious and more comfortable car greenhouses. They eventually crystallised in a new type-form characterised by airiness and great visibility thanks to large glazed areas made with a new material, Plexiglas, in place of heavy traditional. He called it “Panoramica” body, destined to mark the rebirth of his coachwork: Maserati, Lancia, Fiat and MG were “dressed” with this innovative body. In 1949 he built for Antonio Stagnoli a Panoramic body for his Ferrari 166 Mille Miglia (it was the first Ferrari coupé ever).

As a gift for his graduation at Bocconi University of Milan, Elio Zagato, Ugo’s first-born son, received an open-top sports car based on a Fiat 500 B chassis in 1947. This car represented the beginning of his career as a gentleman driver (in a total of 160 races, Elio earned a place on the podium 83 times) and as a manager of the family company. The birth of the Gran Turismo category, conceived in 1949 by Count Giovanni Lurani, journalist Giovanni Canestrini and Elio itself revolutionised the world of automotive competition: the category comprised cars with sports coachwork and a production chassis or bodyshell of which at least 30 examples had to be built. They were, therefore, cars capable of being used on an everyday basis, comfortable and well-finished, yet sufficiently sleek and aerodynamic to race at weekends on the leading circuits. AC, Alfa Romeo, Abarth, Aston Martin, Bristol, Ferrari, Fiat, Maserati, Jaguar, Osca, wore Zagato GT bodies. In 1955 Elio Zagato scored a memorable victory of the International Granturism Championship at the Avus circuit driving a Fiat 8V Zagato.

The even-higher demand for special bodies required a passage from a handcraft to an industrially-based organization. For this reason, the company seriously needed larger spaces to manage its business. Elio Zagato found a new location in Terrazzano (northwest of Milan), very close to Arese where Alfa Romeo would have chosen soon to establish its new plants. In 1960 Ugo Zagato was awarded with the Compasso d’Oro design prize for the design of the Fiat Abarth 1000 Zagato. In this period the mission of Zagato was to design special bodies to be assembled in series and fitted with mechanical organs and interiors supplied by major constructors. Under the partnership with Alfa Romeo the Giulia SZ, the TZ, TZ2, 2600 SZ, the 1750 4R and the Junior Zagato were born. In partnership with Lancia, Zagato continued the “Sport” series with the Lancia Appia Sport, the Flaminia Sport and Super Sport, the Flavia Sport and Supersport and the Fulvia Sport and Sport Spider. In addition there were some for special customers: Osca, Lamborghini, Bristol, Rover, Honda and Fiat.

Initially produced with a 1300 cc engine and immediately featured in the Alfa Romeo catalogue, from 1972 the Alfa Romeo Junior Z was also produced in 1600 cc form as well as the Lancia Fulvia Sport. In response to the Oil crisis and in opposition to the irrational and anti-functionalist trends of the era, Zagato also proposed electric production cars. A new Ferrari Zagato, called 3Z, came to life in 1971, thanks to an idea of Luigi Chinetti of Ferrari NART who financed the decidedly angular spider. It was introduced in 1971 Turin Motor Show and marked the definitive departure from Alfa SZ, TZ and Lancia Flaminia and Appia’s curvy volumes to embrace definitively the squared volumes of Lancia Fulvia Sport and Alfa Romeo Junior Z. Three years later Chinetti committed to Zagato a second car for him. Based on a 330 GTC chassis, it would have been a coupé with removable top. This model was called 330 Convertible Zagato and had few stylistic differences with the 3Z: front lights covered with Plexiglass instead of the eyelid headlight covers. Also the tail was derived from the Spyder but all angles were smoothed and the rear light cluster was enclosed in shallover niches. The most original feature was the roof which could be unhooked and stored in the boot. From Chinetti himself came another special order. On that time he started a new project for a different four seats, mid engined concept which became the 1970 Cadillac N.A.R.T. This should have been a luxurious, sophisticated, high performance 4 seats. The front wheel drive power train of a Cadillac Eldorado was relocated to create a mid-engined layout. Zagato was asked to build the prototype from the drawings and a clay model that was conceived in GM’s studios. After its completion it was displayed at 1971 Turin Motor Show. A Fiat, based on 132, and named Aster was bodied as prototype as well as a Volvo GTZ. The Zagato facility in Terrazzano saw also the assembly of Lancia Beta Sport Spider that established Lancia name in America and Australia and the Bristol 407 convertible, whose design was very similar to the Lancia’s one. 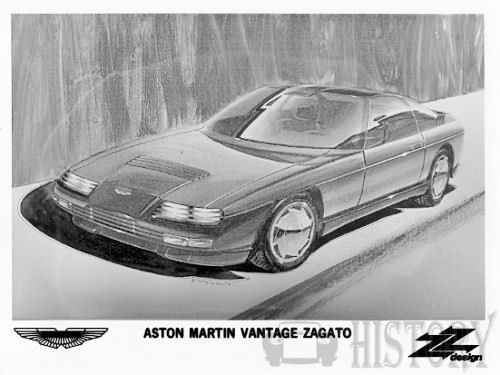 The energy crisis appeared finally to have been overcome. The general climate of recession had passed and a new wind of optimism was blowing. The demand for exclusive spiders and coupes led to the creation of limited, numbered editions. The Aston Martin Vantage (50 units) and Volante Zagato (33 units) were the highest expression of this economic and commercial climate. Furthermore the Milanese coachbuilder bodied the Maserati Spyder and Karif. Furthermore the S.Z. coupe (1989) and roadster named R.Z. (1992) were assembled here for Alfa Romeo. Both cars were born by the first application of CAD process to automobile. The S.Z. was an experimental coupé that revisited Alfa Romeo’s legendary sporting image, a true rear-wheel drive Alfa Romeo coupé, a symbol of sporting pedigree hostile to any compromise. It harks back to the philosophy of the extreme coupés that distinguish the historic Alfa - Zagato relationship: the 1900 SSZ 1954, the Giulietta SZ (Sprint Zagato) 1960, the Alfa Giulia TZ and TZ2 and the 2600 SZ 1965, Junior Z and Alfa Z6.

Zagato faced the need to keep up with the new demands of an evolving market: while it organised (from 1993) a one-brand race series for Alfa Romeo S.Z. and R.Z. it was no longer solely a coachbuilder Atelier, tied to the production of sports cars, but rather a service centre now working in the extended area of transportation design. The company styled and built prototypes and show cars on behalf of car manufacturers but also railways and industrial vehicles.

In 1991 and 1993, the Design Zagato division introduced two Ferrari show cars based on the 348 and the Testarossa where styling motifs subsequently adopted on the F355 and more recently on the 360 Modena and the Enzo were used. In 1992, as a tribute to the Lancia Delta Integrale victories, the Hyena Vmax concept was created and a small series of 25 cars were built. The latest in a long line of memorable, fully functioning and therefore drivable Atelier and show cars, Zagato built the Raptor and the Superdiablo Vmax concept, both powered by a Lamborghini V12 at the request of Mike Kimberley Sant’Agata Bolognese company’s CEO. Elected “Best Concept” at the 1996 edition of the Geneva Motor Show, the Lamborghini Raptor was produced remarkably quickly (less than four months) thanks to the use of new integrated technology applied to the CAD/CAM system that allowed the intermediate styling buck phase to be eliminated. The Raptor represents one of the first experiments in the use of virtual systems in support of and/or in alternative to the construction of mock-ups and concept cars. The Lamborghini Superdiablo represents what could maybe have been the Murcielago (anticipating the greenhouse and the interior). It featured the typical Zagato cues: the double bubble on the roof and the large rear intake of the engine, very similar to supersonic planes’ turbine. In 1998 it was commissioned by FIAT to design and produce three running prototypes with low fuel consumption (3 litres/100 kilometres). The Turin-based corporation presented the Ecobasic at the Geneva Motor Show in 2000 where it was judged to be the best research concept.

Motion and Emotion, this is Zagato’s philosophy for the neoclassical decade. Mass consumption products lost their original recreational and emotional personality. Zagato Atelier creates made-to-measure creations for distinguished clients and gentlemen drivers, deriving its philosophy from the era of the berlinettas of the early 1950s. Special projects created for Aston Martin, Bentley, Ferrari, Maserati, Spyker, Diatto and Alfa Romeo consolidate the brand's business in making custom-built models, almost exclusively coupés with 2 doors and 2 seats. A high attention to volume, mysterious and enticing in shape, make these highly limited series not only ‘timeless beauties,’ but also sound investments.

In July 2011 was reported that specialist car builder CPP (Coventry Prototype Panels) has acquired Zagato, it says Vladimir Antonov is funding CPP and its recent acquisitions, but that CPP Milan s.r.l. is an independent company. At the beginning of 2012 CPP Manufacturing was acquired by Evisage Group, a consulting-service company in automotive engineering field based on Coventry. 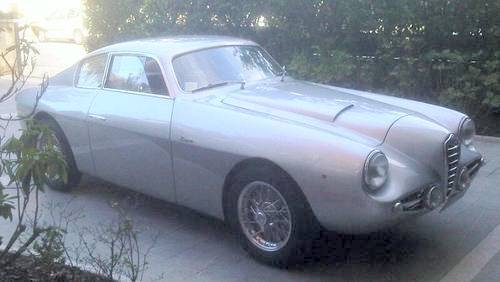