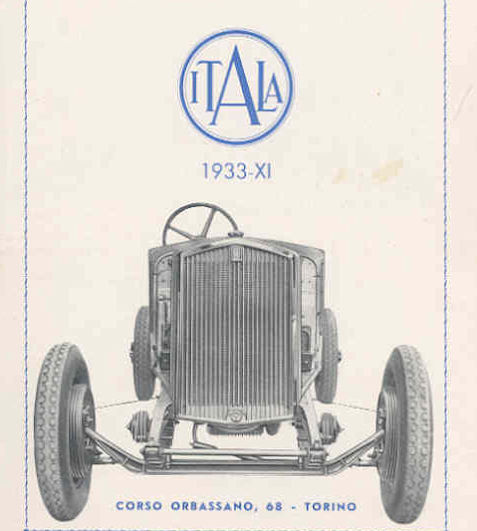 Itala was a car manufacturer based in Turin, Italy from 1904-1934, started by Matteo Ceirano and five partners in 1903.

In 1888, after eight years apprenticeship at his father's watch-making business, Giovanni Battista started building Welleyes bicycles, so named because English names had more sales appeal. In October 1898 Giovanni Battista and Matteo co-founded Ceirano GB & C and started producing the Welleyes motor car in 1899. In July 1899 the plant and patents were sold to Giovanni Agnelli and produced as the first F.I.A.T.s - the Fiat 4 HP. Giovanni Battista was employed by Fiat as the agent for Italy, but within a year he left to found Fratelli Ceirano & C. which in 1903 became Società Torinese Automobili Rapid (S.T.A.R.) building cars badged as 'Rapid'. In 1904 Matteo Ceirano left Ceirano GB & C to create his own brand - Itala. In 1906 Matteo left Itala to found S.P.A. (Società Piemontese Automobili) with chief designer, Alberto Ballacco. In 1906 Giovanni founded SCAT (Società Ceirano Automobili Torino) in Turin. In 1919 Giovanni and Giovanni "Ernesto" co-founded Ceirano Fabbrica Automobili (aka Giovanni Ceirano Fabbrica Automobili) and in 1922 they took control of Fabrica Anonima Torinese Automobili (FATA).

Three cars were offered in the first year, an 18 hp, a 24 hp and a 50 hp. In 1905 they started making very large engined racing cars with a 14.8 Litre 5 cylinder model which won the Coppa Florio and the year after that the Targa Florio. In 1907 a 7,433 cc (453.6 cu in) 35/45 hp model driven by Count Scipione Borghese won the Peking to Paris motor race by three weeks. These sporting successes helped sales dramatically, the company continued to grow. The company experimented with a range of novel engines such as variable stroke, sleeve valve, and "Avalve" rotary types and at the beginning of World War I, offered a wide range of cars. During the war Itala built aeroplane engines but made a loss producing them.

After the armistice car production resumed with models based on the pre war cars such as the Tipo 50 25/35 hp and a re-appearance of the Avalve in the 4,426 cc (270.1 cu in) Tipo 55 but financial success eluded the company

From 1924 the company was being run under receivership and they appointed Giulio Cesare Cappa from Fiat as general manager. He produced a new car, the Tipo 61 with 7 cylinder alloy engine which was well received but he then decided to return to motor sport producing the Tipo 11, a very advanced car with front wheel drive, 1050 cc supercharged V12 engine and all round independent suspension but the car never raced. Two Tipo 61s did take part in the 1928 Le Mans 24 hour race winning the 2 litre class.

The company was bought by truck maker Officine Metallurgiche di Tortona in 1929 and a few more cars were made up to 1935. The remains of the company was sold to Fiat.

A distinctive feature of the pre-World War I 50 hp & 90 hp models was their use of a rotary valve. Each valve fed a pair of cylinders and was mounted alongside, rotating parallel to them. Four ports cast into the valve alternately connected ports to the cylinders through the side of the valve to the inlet and exhaust manifolds at bottom and top of the valves.

Leo Villa began his career as a racing mechanic working on these rotary valve engines for the driver Giulio Foresti. He met Malcolm Campbell, when in 1923, Campbell took over the Itala and Ballot concessions in London. Seeing the publicity potential of racing them at Brooklands, Campbell also bought two of Foresti's race-prepared cars. Foresti and Villa delivered them in person from Paris to Campbell's house at Povey Cross. Impressed by Campbell's wealth and ambitions, Villa accepted an offer to become his permanent mechanic.