Automotive manufacturer County Wexford,Ireland From 1983 to 1987. 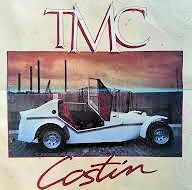 Thompson Manufacturing Co. was an Irish manufacturer of automobiles .

Peter Thompson founded the company in Castlebridge , County Wexford , in 1983 and began producing automobiles. The brand name was TMC . Designer of the vehicles was Frank Costin . In 1988, the production ended after about 26 manufactured copies.  Panoz Auto Development took over the rights to the vehicle frame.

The only model Costin was similar to the Lotus Seven . The chassis consisted of a grid frame and had independent suspension . The body was made of fiberglass , kevlar and aluminum . Unusual for such a vehicle was the version with a Targa roof and hatchback. The doors were attached to the windshield frame and opened up to the front. For the drive motors were out of the Vauxhall Chevette , but were mainly engines of Ford with 1,600 cc displacement and 84 hpor 110 hp or Cosworth engines with 130 hp used.

The vehicles were also offered as a kit for the price of 6000 British pounds .