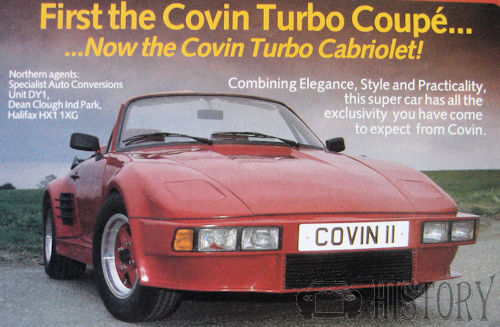 Grannd Performance Cars Limited was an Irish manufacturer of automobiles .

From 1984 to 1998 there was the car brand Covin in England . Last manufacturer there was Grannd Performance Cars from Luton under the direction of Richard Taylor.Richard Taylor founded the new company in Baile Chláir , County Galway , Ireland in 1998 . He continued the production of automobiles and kits . The brand name continued to be Covin . In 2000 the production ended.

In total, around 500 copies of the Covin brand were created during the 16 years.

The Covin Turbo Coupe resembled the Porsche 911 as a coupe . There was also a version with flat front and pop-up headlights on offer. There were versions with the chassis of the VW Beetle and own chassis that could accommodate engines from Alfa Romeo , Ford and Volkswagen .

The Covin Cabriolet was the open version of it.

The Speedster was similar to the Porsche 356 Speedster . He was based on the VW Type 3 Variant .