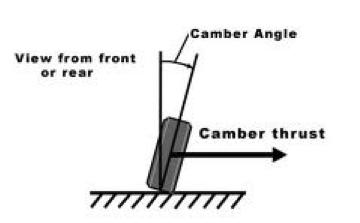 Camber thrust and camber force are terms used to describe the force generated perpendicular to the direction of travel of a rolling tire due to its camber angle and finite contact patch.Camber thrust is generated when a point on the outer surface of a leaned and rotating tire, that would normally follow a path that is elliptical when projected onto the ground, is forced to follow a straight path while coming in contact with the ground, due to friction. This deviation towards the direction of the lean causes a deformation in the tire tread and carcass that is transmitted to the vehicle as a force in the direction of the lean

Camber thrust is approximately linearly proportional to camber angle for small angles, reaches its steady-state value nearly instantaneously after a change in camber angle, and so does not have an associated relaxation length. Bias-ply tires have been found to generate more camber thrust than radial tires.Camber stiffness is a parameter used to describe the camber thrust generated by a tire and it is influenced by inflation pressure and normal load.The net camber thrust is usually in front of the center of the wheel and so generates a camber torque or twisting torque. The orientation of this torque is such that it tends to steer a tire towards the direction that it is leaned.