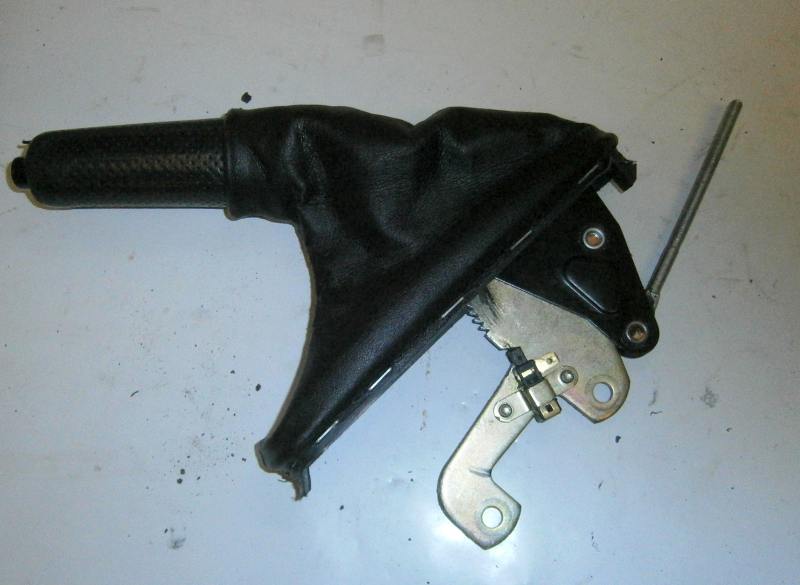 In cars, the parking brake, also called hand brake, emergency brake, or e-brake, is a latching brake usually used to keep the vehicle stationary. It is sometimes also used to prevent a vehicle from rolling when the operator needs both feet to operate the clutch and throttle pedals. Automobile hand brakes usually consist of a cable directly connected to the brake mechanism on one end and to a lever or foot pedal at the driver's position. The mechanism is often a hand-operated lever (hence the hand brake name), on the floor on either side of the driver, or a pull handle located below and near the steering wheel column, or a (foot-operated) pedal located far apart from the other pedals.

Although sometimes known as an emergency brake, using it in any emergency where the footbrake is still operational is likely to badly upset the brake balance of the car and vastly increase the likelihood of loss of control of the vehicle, for example by initiating a rear-wheel skid. Additionally, the stopping force provided by using the handbrake is small and would not significantly aid in stopping the vehicle. The parking brake operates mostly on the rear wheels, which have reduced traction while braking but in some cases, parking brake operates on front wheel, as done in most Citroens manufactured since the end of World War II. The hand brake is instead intended for use in case of mechanical failure where the regular footbrake is inoperable or compromised. Modern brake systems are typically very reliable and equipped with dual-circuit hydraulics and low-brake-fluid sensor systems, meaning the handbrake is rarely used to stop a moving vehicle.

The most common use for a parking brake is to keep the vehicle motionless when it is parked. Parking brakes have a ratchet locking mechanism that will keep them engaged until a release button is pressed. On vehicles with automatic transmissions, this is usually used in concert with a parking pawl in the transmission. Automotive safety expertsrecommend the use of both systems to immobilize a parked car, and the use of both systems is required by law in some places, yet many individuals use only the "Park" position on the automatic transmission and not the parking brake. It's similar with manual transmission cars: They are recommended always to be left with the handbrake engaged, in concert with their lowest gear (usually either first or reverse). The use of both systems is also required by law in some jurisdictions. However, when parking on level ground, many people either only engage the handbrake (gear lever in neutral), or only select a gear (handbrake released). If parking on a hill with only one system results in the car rolling and damaging the car or other property, insurance companies in some countries, for example in Germany, aren’t required to pay for the damages.

School buses which are equipped with a hydraulic brake system will have a hand brake lever to the left of the driver (in left hand drive buses) near the floor. It is operated by pushing the lever down with one's hand to apply the brake, and pulling it upwards to release it. However, this has been known to cause severe back problems in drivers who do this regularly, and many choose to push it up with their feet.

Some cars with automatic transmissions are fitted with automatically releasing parking brakes. Later models require the foot brake to be depressed before the car's transmission can be moved from park. When reverse or drive is selected, the parking brake automatically releases. Earlier models would release the parking brake when the gear selector was placed in a forward or reverse gear without requiring any input on the brake pedal at all. These earlier automatic release systems were a safety hazard, since there would be no protection against accidentally knocking the transmission into gear.

In cars with rear drum brakes, the emergency brake cable usually actuates these drums mechanically with much less force than is available through the hydraulic system.

In cars with rear disc brakes, the emergency brake either actuates the disc calipers (again, with much less force) or a small drum brake housed within the hub assembly (the inner circumference of the disc is often used instead of a separate drum).

Hudson automobiles used an unusual hybrid hydraulic-mechanical dual-brake system which operated the rear brakes through the otherwise conventional mechanical emergency-brake system when a failure of the hydraulic system allowed the pedal to travel beyond its normal limit.

A number of production vehicles, light and medium duty trucks, and motor homes have been made with a separate drum brake on the transmission output shaft; called a driveline parking brake. This has an advantage of being completely independent of other braking systems. This is effective as long as the drive train is intact — propeller shaft, differential, and axle shafts. In many vehicles, this type of parking brake is operated by either a foot pedal or a hydraulic cylinder controlled by the transmission gear selector, or by both.

Large vehicles are usually fitted with power operated or power assisted handbrakes. Power assisted handbrakes are usually found on large vans as well as some older heavy vehicles. These operate in the same way as a conventional handbrake, but pulling the lever will operate a valve that allows air or hydraulic pressure or vacuum into a cylinder which applies force to the brake shoes and makes applying the handbrake easier. When releasing the handbrake, the same mechanism also provides assistance to the driver in disengaging the ratchet. Particularly on commercial vehicles with air operated brakes, this has the added benefit of making it much harder or even impossible to release the parking brake when insufficient air pressure is available to operate the brakes. A reservoir or accumulator is usually provided so a limited amount of power assistance is available with the engine off. Power operated handbrakes are fitted to heavy commercial vehicles with air brakes, such as trucks and buses. These usually are spring applied, with air pressure being used to hold the brake off and powerful springs holding the brakes on. In most cases, a small lever in the cab is connected to a valve which can admit air to the parking brake cylinders to release the parking brake, or release the air to apply the brake. On some modern vehicles the valve is operated electrically from a lever or button in the cab. The system is relatively safe since if air pressure is lost the springs will apply the brakes. Also, the system prevents the parking brake being released if there is insufficient air pressure to apply the foot brake. A disadvantage to this system is that if a vehicle requires towing and can not provide its own air supply, an external supply must be provided to allow the parking brake to be released, or the brake shoes must be manually wound off against the springs.

A recent variation is the electric parking brake. First installed in the 2001 Renault Vel Satis, electric brakes have since appeared in a number of vehicles.

Two variations are available: In the more-traditional "cable-pulling" type, an electric motor simply pulls the emergency brake cable rather than a mechanical handle in the cabin. A more complex unit uses two computer-controlled motors attached to the rear brake calipers to activate it.

It is expected that these systems will incorporate other features in the future. Jaguar, Landrover, BMW, Renault, Subaru and VW already have a system where the emergency brake initiates when the car stops and then goes off as soon as the gas pedal is pressed preventing the car from rolling. The new feature is called a hill hold. The vehicle operator can easily turn off the system.

In the hot rod community they use an E-Stopp. It is an aftermarket push button e-brake that is concealed to keep the nostalgic look of the vehicle. The same system is used in mobility vans for the disabled but the button is mounted wherever is convenient for the driver. CCI has a great electric parking brake.

It is important to know which wheels are providing the braking action when lifting the car with a jack. Typically the rear wheels are the ones that are stopped with parking brakes. Most Citroens, the Alfasud, Saab 99s, Pre-Facelift 900's, and most early Subarus applied the handbrake force to the front wheels, which makes them notable exceptions. If one lifts the braking wheels off the ground then the car can move and fall off the jack. This is why makers recommend that jacking be conducted on level ground and with chocks immobilizing the wheels that remain on the ground.