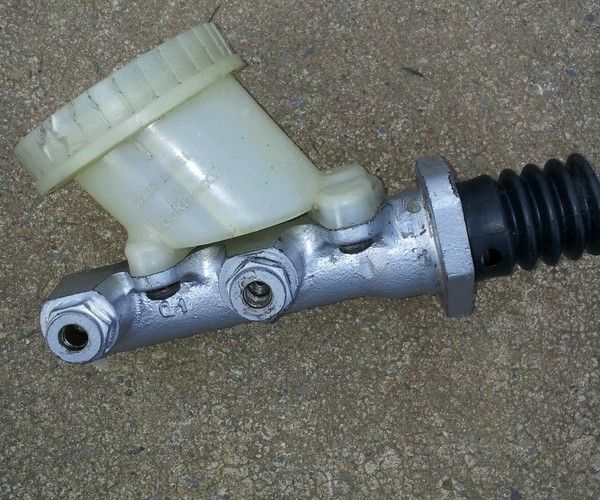 In automotive engineering, the master cylinder is a control device that converts non-hydraulic pressure (commonly from a driver's foot) into hydraulic pressure. This device controls slave cylinders located at the other end of the hydraulic system.

The most common vehicle uses of master cylinders are in brake and clutch systems. In brake systems, the operated devices are cylinders inside of brake calipers and/or drum brakes; these cylinders may be called wheel cylinders or slave cylinders, and they push the brake pads towards a surface that rotates with the wheel (this surface is typically either a drum, or a disc, a.k.a. a rotor) until the stationary brake pad(s) create friction against that rotating surface (typically the rotating surface is metal or ceramic/carbon, for their ability to withstand heat and friction without wearing-down rapidly). In the clutch system, the device which the master cylinder operates is called the slave cylinder; it moves the throw out bearing until the high-friction material on the transmission's clutch disengages from the engine's metal (or ceramic/carbon) flywheel. For hydraulic brakes or clutches alike, flexible high-pressure hoses or inflexible hard-walled metal tubing may be used; but the flexible variety of tubing is needed for at least a short length adjacent to each wheel, whenever the wheel can move relative to the car's chassis (this is the case on any car with steering and other suspension movements; some drag racers and go-karts have no rear suspension, as the rear axle is welded to the chassis, and some antique cars also have no rear suspension movement).