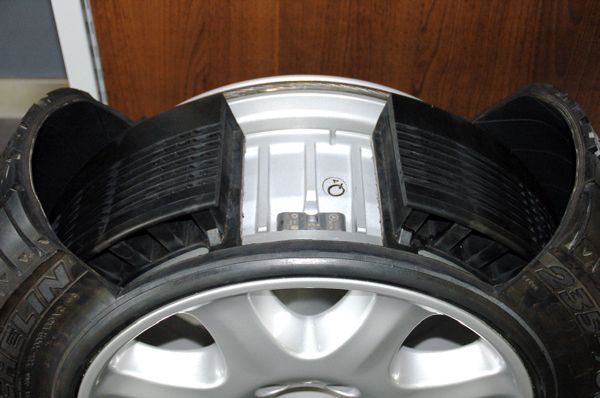 A run-flat tire is a pneumatic vehicle tire that is designed to resist the effects of deflation when punctured, and to enable the vehicle to continue to be driven at reduced speeds (up to 55 mph (90 km/h)), and for limited distances of up to 100 mi (160 km), or even 200 mi (320 km) depending on the type of tire.

There are three basic technologies currently available, described below.

The origins of the commercial self-supporting run-flat tire started in 1935 with a tire that had a fabric inner tire. The tire was advertised as a protection against blow outs, a common and dangerous occurrence in the 1930s.

In 1934, Michelin introduced a tire that was based on technology developed for local commuter trains and trolleys. It had a safety rim inside the tire which if punctured would run on a special foam lining. The tire was sold for military use and for specialized vehicles like bank armoured cars. It was advertised as "semi-bullet proof". While the tire performed as advertised it was far too expensive to be a feasible option for private automobile users.

In 1958, Chrysler teamed with Goodyear Tire and Rubber Company to offer Captive Air run-flat tires using an interlining to carry the weight.

In 1972 Dunlop launched the Denovo "fail-safe" wheel and tyre system that became optional equipment on the Rover P6 3500 in 1973, and by 1983 evolved into the TD/Denloc which became standard equipment across the whole Austin Metro range.

Most recently, Bridgestone run-flat tires are supplied on some new model BMW cars. The automaker promoted these as a safety feature and as an alternative to carrying a spare tire.

Self-supporting run-flat tires are now common on light trucks and passenger cars and typically provide for the vehicle to drive for 50 miles (80 km) at around 50 miles per hour (80 km/h). However, if the tires are subject to this kind of misuse, they may become irreparably damaged in the process. In addition, if the tire is punctured in the sidewall or at the edge of the tread, repair may be impossible or unsafe. These tires carry a 20 to 40 percent weight penalty over similar standard tires. The thicker sidewall also means higher rolling resistance, thus reducing the vehicle's gas mileage.

These tires contain an extra lining within the tire that self-seals in the event of a small hole due to a nail or screw. In this way, the loss of air is prevented from the outset such that the tire is either permanently self-repairing or at least loses air very slowly.

There are also a number of retrofitted tire sealants which act in a similar way to self-sealing tires. These compounds are normally injected through the tire valve. The rotating force then distributes the compound onto the inner surface of the tire to act as a self-sealing lining within the tire.

In this system, there is an additional support ring attached to the wheel that can support the weight of the vehicle in the event of a loss of pressure. While these systems generally offer better ride quality because their sidewall's stiffness can be equivalent to a standard tire, the requirement to have both special wheels and special tires increases cost and limits these systems from widespread use.

Further advantages are derived from not needing to carry a spare wheel: The space can be used for other purposes. Also, the absence of a spare wheel contributes to lower vehicle weight which will in turn reduce fuel consumption, reduce harmful exhaust emissions, improve performance, handling and braking characteristics. However, these may be negated by the increased weight of the tires if they are self-supporting.

Due to reinforcement in tire side walls, run-flat tires usually give firmer rides compared to conventional tires.

The primary benefit of using run-flat tires is continued mobility in case of a loss of air pressure, either due to a 'normal' puncture or a hostile deliberate act or even a bullet shot while the vehicle is travelling at high speed. Performance criteria are therefore in terms of distance and speed at which the vehicle can escape without becoming immobile and the steering control over the vehicle during this process.

The usual standard of performance, especially for military or security vehicles, are the Finabel standards.