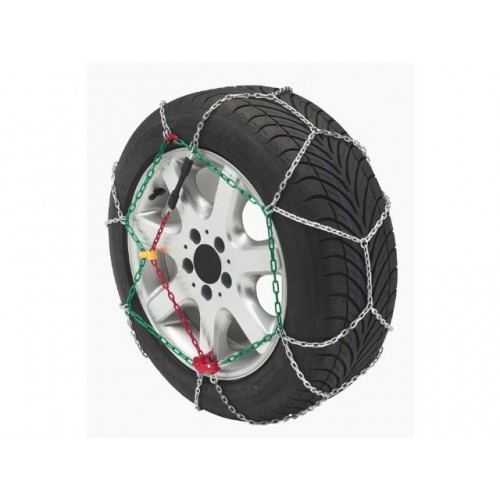 Snow chains, or tire chains, are devices fitted to the tires of vehicles to provide maximum traction when driving through snow and ice.

Snow chains are attached to the drive wheels of a vehicle. Chains are usually sold in pairs and must be purchased to match a particular tire size (tire diameter and tread width). Driving with chains reduces fuel efficiency and can reduce the speed of the automobile to approximately 50 km/h (30 mph).

In snowy conditions, transportation authorities may require that snow chains or other traction aids be installed on vehicles, or at least supplied for them. This can apply to all vehicles, or only those without other traction aids, such as four-wheel drive or special tires. Local requirements may be enforced at checkpoints or by other type of inspection. Snow chains should be installed on one or more drive axles of the vehicle, with requirements varying for dual-tire or multi-driven-axle vehicles that range from 'one pair of tires on a driven axle' to 'all tires on all driven axles', possibly also one or both steering (front) wheels, requiring snow chains whenever required by signage or conditions.

Snow chains were invented in 1904 by Harry D. Weed in Canastota, New York. Weed received U.S. Patent Number 768495 for his "Grip-Tread for Pneumatic Tires" on August 23, 1904. Weed's great-grandson, James Weed, said that Harry got the idea of creating chains for tires when he saw drivers wrap rope, or even vines, around their tires to increase traction on muddy or snowy roads, which were the norm at the turn of the 20th century. He sought to make a traction device that was more durable and would work with snow as well as mud.

In July 1935, the Canadian Auguste Trudeau obtained a patent for his tread and anti-skidding chain.

Tires come with standardized tire code sizing information, found on the sidewalls of the tires. The first letter(s), indicate the vehicle type (P for passenger, LT for light truck). The next three digits indicate the tire's width in millimeters. The middle two digit number indicates the tire's height-to-width ratio. The next character is a letter 'R,' which indicates radial ply tires (rather than radius). followed by a final two digit number indicating the rim size for the vehicle's wheels.

Additionally, the correct Society of Automotive Engineers (SAE) class of snow chains must be installed, based on the wheel clearance of the vehicle.

The SAE Class "S" well clearance is a common requirement on newer cars, especially if after-market wider, low-profile, or larger tires and/or wheels are fitted.

The classes are defined as follows:

Laws vary  regarding the legality of snow chain use. Some countries require them in certain snowy conditions or during certain months of the year, while other countries prohibit their use altogether to preserve the surface of the roads.