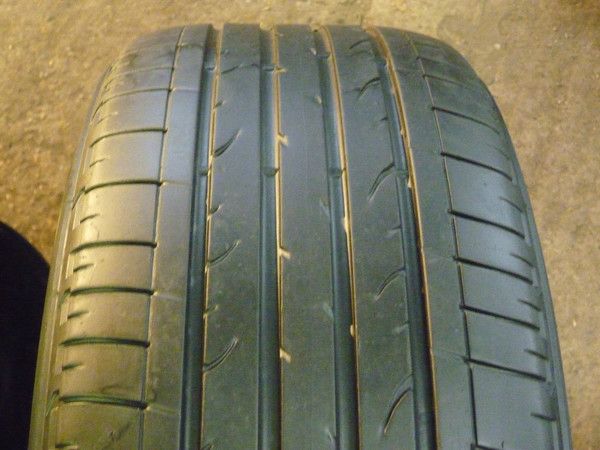 The earliest tires were bands of iron (later steel), placed on wooden wheels, used on carts and wagons. The tire would be heated in a forge fire, placed over the wheel and quenched, causing the metal to contract and fit tightly on the wheel. A skilled worker, known as a wheelwright, carried out this work. The outer ring served to "tie" the wheel segments together for use, providing also a wear-resistant surface to the perimeter of the wheel. The word "tire" thus emerged as a variant spelling to refer to the metal bands used to tie wheels.

The first practical pneumatic tire was made by John Boyd Dunlop while working as a veterinarian in May Street, Belfast, Ireland in 1887 for his son's bicycle, in an effort to prevent the headaches his son had while riding on rough roads (Dunlop's patent was later declared invalid because of prior art by fellow Scot Robert William Thomson). Dunlop is credited with "realizing rubber could withstand the wear and tear of being a tire while retaining its resilience".The development of this technology hinges on myriad engineering advances. In terms of materials, the vulcanization of natural rubber is credited to Charles Goodyear and Robert William Thomson. Synthetic rubbers were invented in the laboratories of Bayer in the 1920s.Today, over 1 billion tires are produced annually in over 400 tire factories, see List of Tire Companies.

A tire (or tyre) is a ring-shaped covering that fits around a wheel's rim to protect it and enable better vehicle performance. Most tires, such as those for automobiles and bicycles, provide traction between the vehicle and the road while providing a flexible cushion that absorbs shock.

The materials of modern pneumatic tires are synthetic rubber, natural rubber, fabric and wire, along with carbon black and other chemical compounds. They consist of a tread and a body. The tread provides traction while the body provides containment for a quantity of compressed air. Before rubber was developed, the first versions of tires were simply bands of metal that fitted around wooden wheels to prevent wear and tear. Early rubber tires were solid (not pneumatic). Today, the majority of tires are pneumatic inflatable structures, comprising a doughnut-shaped body of cords and wires encased in rubber and generally filled with compressed air to form an inflatable cushion. Pneumatic tires are used on many types of vehicles, including cars, bicycles, motorcycles, trucks, earthmovers, and aircraft. Metal tires are still used on locomotives and railcars, and solid rubber (or other polymer) tires are still used in various non-automotive applications, such as some casters, carts, lawnmowers, and wheelbarrows.

Historically, the proper spelling is "tire" and is of French origin, coming from the word tirer, to pull. The reason for this naming is that originally "tire" referred to iron hoops or thick wires bound to carriage wheels. In French blacksmithing the word for a drawn iron rod is a tirer, or pull. The same word was often used for any metal drawing or rolling process. In an article in the London Magazine/Intelligencer of 1853 "The Utility of Broad Wheels," it explains that the common practice was to bend two rods, called "tires," into hoops and bind them to the wheel, but it is preferable to use an iron band, called a "broad wheel" rather than the rods, because as the rods wear they bite into the wheel. Another early mention of a tire in English is in The Scots Magazine, Volume 15 By James Boswell (1753).

The spelling tyre does not appear until the 1840s when the English began shrink fitting railway car wheels with malleable iron. Nevertheless, traditional publishers continued using tire. The Times newspaper in Britain was still using tire as late as 1905. The spelling tyre, however, began to be commonly used in the 19th century for pneumatic tires in the UK. The 1911 edition of the Encyclopædia Britannica states that "[t]he spelling 'tyre' is not now accepted by the best English authorities, and is unrecognized in the US", while Fowler's Modern English Usage of 1926 says that "there is nothing to be said for 'tyre', which is etymologically wrong, as well as needlessly divergent from our own [sc. British] older & the present American usage". However, over the course of the 20th century tyre became established as the standard British spelling.

Pneumatic tires are manufactured in about 450 tire factories around the world. Over one billion tires are manufactured annually, making the tire industry a major consumer of natural rubber. It is estimated that by 2015, 1.72 billion tires are expected to be sold globally. Tire production starts with bulk raw materials such as rubber, carbon black, and chemicals and produces numerous specialized components that are assembled and cured. Many kinds of rubber are used, the most common being styrene-butadiene copolymer. This article describes the components assembled to make a tire, the various materials used, the manufacturing processes and machinery, and the overall business model.