Other numbers are marketing codes used at the manufacturer's discretion. 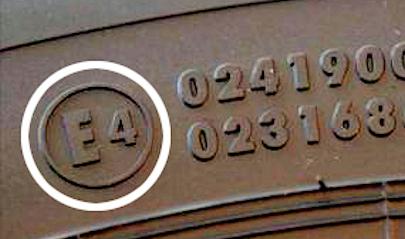 Tire manufacturers usually embed a mold serial number into the sidewall area of the mold, so that the tire, once molded, can be traced back to the mold of original manufacturer.

The design of treads and the interaction of specific tire types with the roadway surface type produces considerable effect upon sound levels or noise pollution emanating from moving vehicles. These sound intensities increase with higher vehicle speeds. The acoustic intensity produced varies considerably depending on the tire tread design and the road surface type. There is a study "under development" that aims predict the interior noise due to the vibrations of a rolling tire structurally transmitted to the hub of a vehicle".

The National Highway and Traffic Safety Administration (NHTSA) is a U.S. government body within the Department of Transportation tasked with regulating automotive safety in the United States.

The Uniform Tire Quality Grading System (UTQG), is a system for comparing the performance of tires, established by the United States National Highway Traffic Safety Administration according to the Code of Federal Regulations 49 CFR 575.104. The UTQG regulation requires labeling of tires for tread wear, traction, and temperature.

The European Tyre and Rim Technical Organization (ETRTO) is the European standards organization "to establish engineering dimensions, load/pressure characteristics and operating guidelines" . for tires, rims and valves. It is analogous to T&RA.

The Japanese Automobile Tire Manufacturers Association (JATMA) is the Japanese standards organization for tires, rims and valves. It is analogous to T&RA and ETRTO.

The Transportation Recall Enhancement, Accountability and Documentation Act (TREAD Act) is a United States federal law that sets standards for testing and the reporting of information related to products involved with transportation such as cars and tires.

Radio Frequency IDentification tags (RFID) are passive transponders affixed to the inside of the tire for purposes of automatic identification. Tags are encoded with various types of manufacturing data, including the manufacturer's name, location of manufacture, tire type, manufacturing date, and in some cases test data. RFID transponders can remotely read this data automatically. RFID tags are used by auto assemblers to identify tires at the point of assembly to the vehicle. Fleet operators utilize RFID as part of tire maintenance operations.

Proper vehicle safety requires specific attention to inflation pressure, tread depth, and general condition of the tires. Over-inflated tires run the risk of explosive decompression (they may pop). On the other hand, under-inflated tires have a higher rolling resistance and suffer from overheating and rapid tread wear particularly on the edges of the tread. Excessive tire wear will reduce steering and braking response,and tires worn down past their safety margins and into the casing run the very real risk of rupturing. Also, certain combinations of cross ply and radial tires on different wheels of the same vehicle can lead to vehicle instability, and may also be illegal. Vehicle and tire manufacturers provide owners' manuals with instructions on how to check and maintain tires.