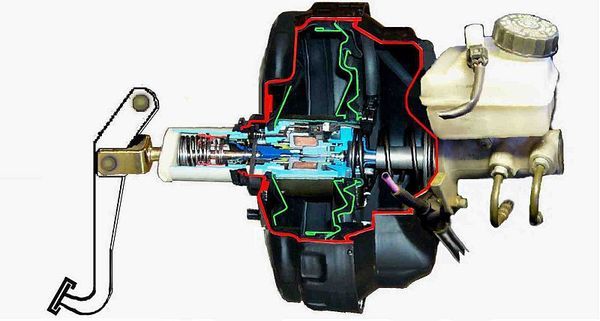 A vacuum servo is a component used on motor vehicles in their braking system, to provide assistance to the driver by decreasing the braking effort. In the USA it is commonly called a brake booster.

Albert Dewandre (Liege, Belgium), an engineer and business owner, was the inventor of servo-brake or brake booster system “Dewandre” in 1927. It is a brake boosting system that uses the depression caused by the suction in the intake manifold of an internal combustion engine to reduce the pressure on the brake pedal. The advantage of the Dewandre system is twofold: a softer push on the brake pedal, but also a notoriously shorter braking distance. His invention was manufactured and sold through the Robert Bosch Company.

This article mainly refers to the electromechanical device in the context of a brake booster or vehicular braking-system assist. The term "vacuum servo" is actually a generic term for any device which uses a vacuum or vacuum sensor to control an electrically operated servo (which may or may not be controlled via the output of a microchip which has data regarding the state of the vacuum as input) which in turn actuates another part. Vacuum servos, more accurately termed "vacuum-actuated servo motors" have also been used extensively in engineering roles other than brake boosters. As an example, the cruise control units of many fuel-injected commercial passenger vehicles produced from 1988 use vacuum-actuated servos (a more descriptive term for "vacuum servo") to control an electric motor which would then manipulate the angle of the throttle valve (typically a butterfly valve) on the engine in order to maintain the speed which the driver had selected via the cruise control speed selection system, thus creating an system which automatically controls the airflow into the combustion chamber, in turn affecting the quantity of fuel injected, which then determines the amount of power the engine produces per cylinder per combustion stroke.

It uses a stored vacuum to increase braking force applied by the driver to the brake pedal, before applying the transferred force to the brake master cylinder.

The vacuum is generated in two distinct methods, dependent on the type of internal combustion engine, or other motive force (as in electric vehicles). In naturally aspirated petrol engines, the manifold vacuum is utilized, whereas in turbo charged and diesel engines, a separate vacuum pump is used. The vacuum is transferred to the servo along semi-rigid plastic lines, and is stored in the servo by using a non-return valve.

The vacuum booster or vacuum servo is used in most modern hydraulic brake systems which contain four wheels. The vacuum booster is attached between the master cylinder and the brake pedal and assists the braking force applied by the driver. These units consist of a hollow housing with a movable rubber diaphragm across the center, creating two chambers. When attached to the intake manifold of the engine or the vacuum pump, the pressure in both chambers of the unit is lowered. The equilibrium created by the low pressure in both chambers keeps the diaphragm from moving until the brake pedal is depressed. A return spring keeps the diaphragm in the starting position until the brake pedal is applied.

When the brake pedal is applied, the movement opens an air valve which lets in atmospheric pressure air to one chamber of the booster. Since the pressure becomes higher in one chamber, the diaphragm moves toward the lower pressure chamber with a force created by the area of the diaphragm and the differential pressure. This force, in addition to the driver's foot force, pushes on the master cylinder piston.

A relatively small diameter booster unit is required; for a very conservative 50% manifold vacuum, an assisting force of about 1500 N (150 kgf) is produced by a 20 cm diaphragm with an area of 0.03 square metres. The diaphragm will stop moving when the forces on both sides of the chamber reach equilibrium. This can be caused by either the air valve closing (due to the pedal apply stopping) or if "run out" is reached. Run out occurs when the pressure in one chamber reaches atmospheric pressure and no additional force can be generated by the now stagnant differential pressure. After the run out point is reached, only the driver's foot force can be used to further apply the master cylinder piston.

Apart from this additional booster setup, the braking system is a normal Hydraulic brake system.