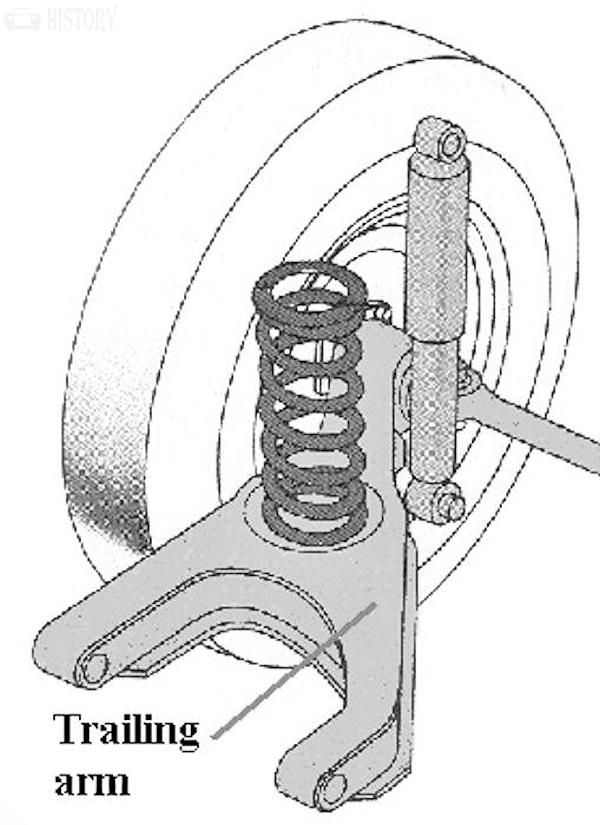 Trailing-arm designs in live axle setups often use just two or three links and a Panhard rod to locate the wheel laterally. A trailing arm design can also be used in an independent suspension arrangement. Each wheel hub is located only by a large, roughly triangular arm that pivots at one point, ahead of the wheel. Seen from the side, this arm is roughly parallel to the ground, with the angle changing based on road irregularities. A twist-beam rear suspension is very similar except that the arms are connected by a beam, used to locate the wheels and which twists and has an anti-roll effect.

A semi-trailing arm suspension is a supple independent rear suspension system for automobiles where each wheel hub is located only by a large, roughly triangular arm that pivots at two points. Viewed from the top, the line formed by the two pivots is somewhere between parallel and perpendicular to the car's longitudinal axis; it is generally parallel to the ground. Trailing-arm and multilink suspension designs are much more commonly used for the rear wheels of a vehicle where they can allow for a flatter floor and more cargo room. Many small, front-wheel drive vehicles feature a MacPherson strut front suspension and trailing-arm rear axle.