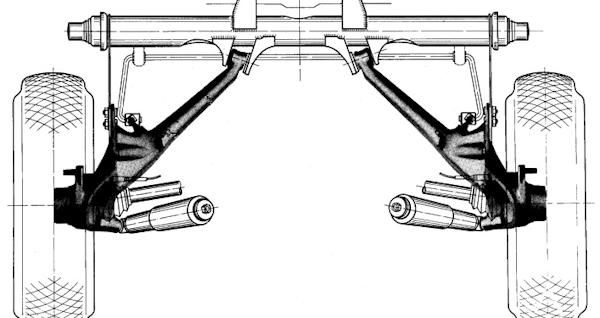 A torsion bar suspension, also known as a torsion spring suspension or torsion beam suspension, is a general term for any vehicle suspension that uses a torsion bar as its main weight bearing spring. One end of a long metal bar is attached firmly to the vehicle chassis; the opposite end terminates in a lever, the torsion key, mounted perpendicular to the bar, that is attached to a suspension arm, a spindle, or the axle. Vertical motion of the wheel causes the bar to twist around its axis and is resisted by the bar's torsion resistance. The effective spring rate of the bar is determined by its length, cross section, shape, material, and manufacturing process.

Torsion bar suspensions are used on combat vehicles or tanks like the T-72, Leopard 1, Leopard 2, M18 Hellcat, and Abrams (many tanks from late in World War II used this suspension), and on trucks and SUVs from Ford, Dodge, GM, Mitsubishi, Mazda, Nissan, Isuzu and Toyota. Manufacturers change the torsion bar or key to adjust the ride height, usually to compensate for heavier or lighter engines. While the ride height may be adjusted by turning the adjuster bolts on the stock torsion key, rotating the stock key too far can bend the adjusting bolt and (more importantly) place the shock piston outside its standard travel. Over-rotating the torsion bars can also cause the suspension to hit the bump-stop prematurely, causing a harsh ride. Aftermarket forged-metal torsion key kits use relocked adjuster keys to prevent over-rotation, and shock brackets to keep the piston travel in the stock range.

The main advantages of a torsion bar suspension are durability, easy adjustability of ride height, and small profile along the width of the vehicle. It takes up less of the vehicle's interior volume than coil springs. A disadvantage is that torsion bars, unlike coil springs, usually cannot provide a progressive spring rate. In most torsion bar systems, ride height (and therefore many handling features) may be changed by simply adjusting bolts that connect the torsion bars to the steering knuckles. In most cars with this type of suspension, swapping torsion bars for a different spring rate is usually an easy task.

Some vehicles use torsion bars to provide automatic levelling, using a motor to pre-stress the bars to provide greater resistance to load and, in some cases (depending on the speed with which the motors can act), to respond to changes in road conditions. Height adjustable suspension has been used to implement a wheel-change mode where the vehicle is raised on three wheels so that the remaining wheel is lifted off the ground without the aid of a jack.

Before World War II, the front wheel drive Citroen Traction Avant (1934) had independent front torsion bar suspension and a flexible trailing dead axle, also sprung by torsion bars. The flexibility of the axle beam provided wheel location features like a twist beam axle. The Czechoslovakian Tatra cars designed by Professor Hans Ledwinka in the mid-1930s used all round independent torsion bar suspension, along with air cooled rear engines. Also in the 1930s, prototypes of the first Volkswagen Beetle incorporated torsion bars—especially its transverse mounting style. Ledwinka's concept had been copied by Ferdinand Porsche, whose successors later had to acknowledge the influence of Ledwinka's sophisticated Tatra models on the Porsche-designed Kdf-Wagen of 1938 (later renamed the VW Beetle), a post-war lawsuit resulting in a DM3,000,000 settlement paid by Volkswagen to Ringhoffer-Tatra in 1961.

The system was applied to many new combat vehicle designs during the Second World War. It was used extensively in European cars Renault, Citroën and Volkswagen, as well as by Packard in the 1950s. The Packard used torsion bars at both front and rear, and interconnected the front and rear systems to improve ride quality. The then revolutionary Jaguar E-Type introduced in 1961 had a unique torsion bar front suspension and an independent coil spring rear suspension using four shock absorbers with concentric springs.

An early application of a torsion bar in an American car was by Hudson Motor Car Company of Detroit who had introduced the innovative front Axle Flex suspension in 1934 Hudson and Terraplane cars and realized for 1935 that a transverse torsion bar linked to the rear axle was needed as an anti-roll bar to stabilize the cars. The single torsion bar was mounted through the frame sides behind the rear axle and then attached by arms and links to the front side of the spring U-bolt plates. Axle Flex was discontinued for the 1936 model year.

The most famous American passenger car application was the Chrysler system used beginning with the 1957 model year, although Chrysler's "Torsion-Aire" suspension was only for the front; the same basic system (longitudinal mounting) was maintained until the 1981 introduction of the K-car. A reengineered torsion bar suspension, introduced with the 1976 Dodge Aspen, introduced transverse-mounted torsion bars (possibly based on the Volkswagen Type 3 passenger car) until production ended in 1989 (with Chrysler's M platform). Some generations of the Dodge Dakota and Durango did use torsion bars on the front suspension.

General Motors first used torsion bars on their light duty pickup trucks in 1960 until it was phased out in 1963 where traditional coil springs are used up front for their 2WD trucks. Its first use in a passenger car was in 1966, starting with the E-platform vehicles (Oldsmobile Toronado, Cadillac Eldorado), 4 wheel drive S-10 pickups & Astro vans with optional all-wheel drive, and since 1988, full size trucks and SUVs with four wheel drive (GMT400, GMT800, and GMT900 series).

Some front-wheel drive automobiles use a related type of torsion beam suspension, usually called a twist beam rear suspension, in which the rear wheels are carried on trailing arms connected by a laterally mounted torsion beam. The torsion beam functions both as wheel locating arm and as an anti-roll bar to resist lateral motion of the wheels as the body leans in turns. Its advantages are that it is inexpensive to manufacture and install, and engages a minimum amount of interior volume, leaving more space for the carriage of passengers, cargo, and other components. Because the torsion beam acts in the lateral plane, not vertically, the twist beam axle cannot provide ride height adjustment, and it suffers, to some extent, similar car handling limitations as other beam axle suspensions. However these limitations may not be apparent on the road, because of the trend towards firmer, more sporty suspension setups with more limited wheel travel. Twist-beam rear suspensions were pioneered on the Volkswagen Golf in the early 1970s, and remain common on compact cars and minivans. Some street trucks and SUVs have that type of front end such as the Ford Ranger and Ford Explorer

The German World War II Panther tank (and at least some Tigers) had double torsion bars Needing bars longer than the width of the tank to get the required spring rate and maximum elastic bend angle from available steel alloys, designer Professor Ernst Lehr created a suspension that effectively folded the bars in half. For each wheel, one rod was attached to the suspension arm, while another was mounted to a nearby point on the frame. On the opposite side of the tank, the two rods were attached to each other and fitted into a pivot. Deflection of the suspension arm caused both halves of the double torsion bar to twist.

Torsion bars were sometimes used instead of conventional coil valve springs in some older motorcycles, such as the Honda CB450, and also on the Panhard Dyna X and Panhard Dyna Z cars of the 1950s. They were also used in the door mechanism of the DeLorean DMC-12 automobile. 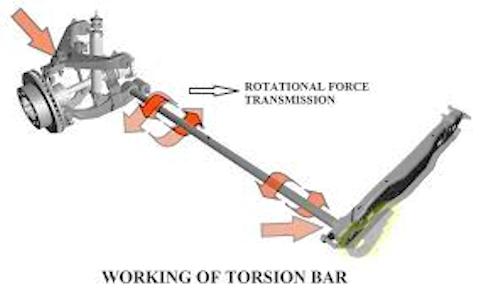