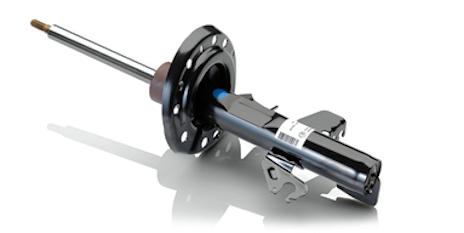 A shock absorber is a mechanical device designed to smooth out or damp shock impulse, and dissipate kinetic energy. It is a type of dashpot.

Other names for a shock absorber include damper and dashpot. The automotive suspension component is often called just shock. During the early 20th century in the U.S., the then-well-known Houdaille brand (pronounced WHO-dye) was in some places a genericized trademark for the device, but has since disappeared from use.

Pneumatic and hydraulic shock absorbers are used in conjunction with cushions and springs. An automobile shock absorber contains spring-loaded check valves and orifices to control the flow of oil through an internal piston.

The shock absorber absorbs and dissipates energy. One design consideration, when designing or choosing a shock absorber, is where that energy will go. In most dashpots, energy is converted to heat inside the viscous fluid. In hydraulic cylinders, the hydraulic fluid heats up, while in air cylinders, the hot air is usually exhausted to the atmosphere. In other types of dashpots, such as electromagnetic types, the dissipated energy can be stored and used later. In general terms, shock absorbers help cushion vehicles on uneven roads.

Shock absorbers are an important part of automobile and motorcycle suspensions, aircraft landing gear, and the supports for many industrial machines. Large shock absorbers have also been used in structural engineering to reduce the susceptibility of structures to earthquake damage and resonance. A transverse mounted shock absorber, called a yaw damper, helps keep railcars from swaying excessively from side to side, and is important in passenger railroads, commuter rail, and rapid transit systems, because it prevents railcars from damaging station platforms. The success of passive damping technologies in suppressing vibration is demonstrated by its market size—around US $4.5 billion.

In a vehicle, shock absorbers reduce the effect of traveling over rough ground, leading to improved ride quality and increase in comfort. While shock absorbers serve the purpose of limiting excessive suspension movement, their intended sole purpose is to dampen spring oscillations. Shock absorbers use valving of oil and gasses to absorb excess energy from the springs. Spring rates are chosen by the manufacturer based on the weight of the vehicle, loaded and unloaded. Some people use shocks to modify spring rates but this is not the correct use. Along with hysteresis in the tire itself, they dampen the energy stored in the motion of the unsprung weight up and down. Effective wheel bounce damping may require tuning shocks to an optimal resistance.

Applied to a structure such as a building or bridge it may be part of a seismic retrofit or as part of new, earthquake resistant construction. In this application it allows yet restrains motion and absorbs resonant energy, which can cause excessive motion and eventual structural failure.

It may eventually be possible to generate useful energy from the displacement of the fluid in a shock absorber.

Shock absorbers are sometimes used to absorb kinetic energy during lifting with offshore cranes. The kinetic energy comes from velocity differences due to wave motion.

There are several commonly-used approaches to shock absorption: