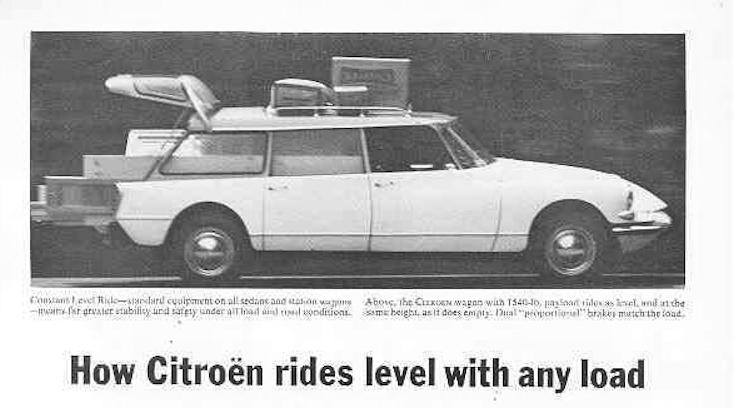 Self-levelling refers to an automobile suspension system that maintains a constant ride height of the vehicle above the road, regardless of load.

Many vehicle systems on a conventional vehicle are negatively affected by changes in load, including aerodynamic properties, headlights, bumpers, shock absorption from the suspension and the vehicle's performance in a collision.

Numerous manufacturers realize this conflict and have pursued different avenues to achieve both comfort and load capacity simultaneously. 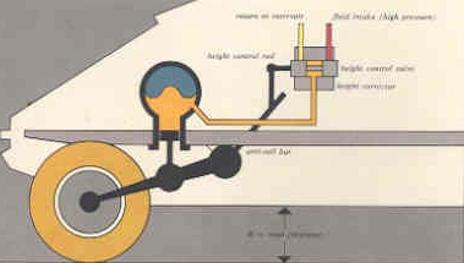 In 1954, Citroën introduced the first self-levelling rear suspension, and then in 1955 pioneered self-levelling of all four wheels, using its hydropneumatic system. Since then, millions of Citroën cars have been equipped with self-levelling as an unobtrusive, but integral design feature. The Citroën's dashboard includes a five-position lever which allows the driver to select whether the car would travel with the body in a high or low position. When the engine is turned off, the suspension slowly loses pressure until the car rests on the rubber bump stops. When the engine is restarted it rises back to its pre-selected height.

In 1966, Rolls-Royce licensed Citroën's hydropneumatic system to fit to the rear axle of the Silver Shadow. At first, both the front and rear of the car were controlled by the leveling system; the front levelling was deleted in 1969 as it had been determined that the rear levelling did almost all the work. Rolls-Royce achieved a high degree of ride quality with this arrangement.

Land Rover developed a different system for the Range Rover in the early 1970s. The Range Rover was intended to be as comfortable on the road as a normal saloon car yet as capable of heavy off-road use as a traditional Land Rover. This highlighted the contradiction in suspension design as the Range Rover used all-round long-travel coil springs. If these were kept soft to maintain comfort they would compress too much under a heavy payload, restricting axle travel when off-road and compromising handling. Land Rover developed a self-energising hydraulic strut as part of the rear suspension. Of similar construction to a hydraulic shock absorber the strut used the motion of the suspension travelling over bumps to pump itself back up to a pre-set height. It was sufficiently powerful to regain up to 85% of normal ride height with a full load over the rear axle, and had the advantage of requiring no external power source or a dedicated hydraulic system in the vehicle. The same system was applied to the Land Rover in the 1980s when these vehicles adopted the Range Rover's coil spring suspension. In the 1990s Land Rover, in pursuit of the same blend of on- and off-road ability, developed an air suspension system that was both self-levelling and height adjustable. Originally this was in conjunction with live axles but it is now used with fully independent suspension using wishbones. The original coil-springs-with-hydraulic-strut system is still used on certain models of the current Land Rover Defender.