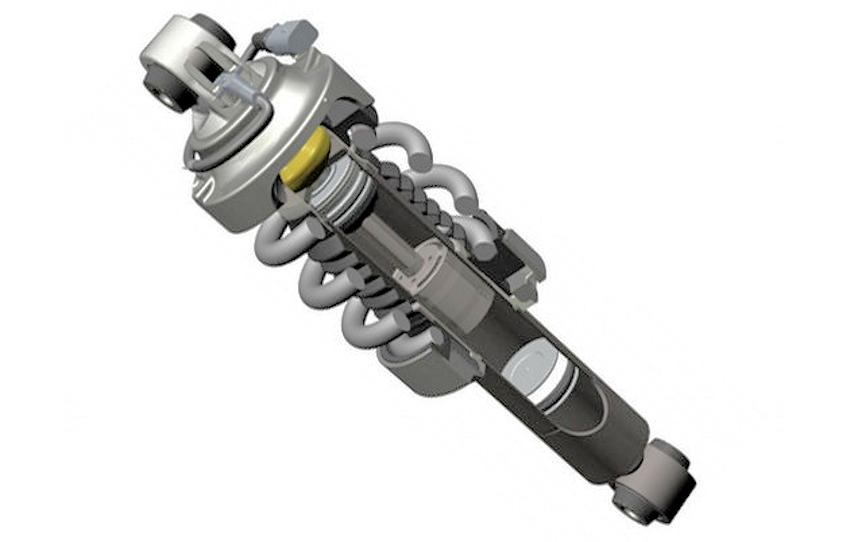 MagneRide is an automotive suspension system owned by Beijing West Industries that utilizes magnetically controlled dampers, or shock absorbers, for a highly adaptive ride. As opposed to traditional suspension systems, MagneRide has no mechanical valves or small moving parts that can wear out. This system consists of four monotube dampers, one on each corner of the vehicle, a sensor set, and an ECU (Electronic Control Unit) to maintain the system.

The dampers are filled with magnetorheological fluid, a mixture of easily magnetized iron particles in a synthetic hydrocarbon oil. In each of the monotube dampers is a piston containing two electromagnetic coils and two small fluid passages through the piston. The electromagnets are able to create a variable magnetic field across the fluid passages. When the magnets are off, the fluid travels through the passages freely. However, when the magnets are turned on, the iron particles in the fluid create a fibrous structure through the passages in the same direction of the magnetic field. The strength of the bonds between the magnetized iron particles causes the viscosity of the fluid to increase resulting in a stiffer suspension. Altering the strength of the current results in an instantaneous change in force of the piston. If the sensors sense any body roll, they communicate the information to the ECU. The ECU will compensate for this by changing the strength of the current to the appropriate dampers.

Ride and Handling Performance: Easier to drive on challenging surfaces; "Blend of balance and grip is near perfect".

The current application of MagneRide is the third generation. The first generation was created by Delphi Corporation and debuted on the Cadillac Seville STS. Previous generations of MagneRide used more primitive dampers. The piston inside these dampers contained a single, large electromagnetic coil. The ECU contained lead and had reached the limit of its potential.

The previous generations were used as a basis for BWI's newest version of MagneRide. Changes from the previous generation include uprated seals and bearings to extend its application to heavier cars and SUV's. The most notable improvements in the new system are the ECU and coils.

The legislative requirement for lead-free ECU's caused BWI to redesign their control unit for the third generation. Because they could not use lead, BWI designed their new ECU from scratch. The new and improved ECU has three times the computing capacity as the previous edition as well as ten times more memory. It also has greater tuneability.

As opposed to the previous generation's single coil, the third generation brought two smaller coils in each damper. With the single electromagnetic coil, there was a small delay from when the ECU turned off the current to when the damper lost its magnetic field. This was caused by a temporary electric current, or eddy current, in the electromagnet. This phenomenon resulted in a 20 ms delay in reaction time of the dampers. BWI eliminated this delay with its dual coil system. The two coils are wound in opposite directions to each other, cancelling out the eddy currents. The dual coil system effectively eliminated the delay, causing a quicker responding suspension system.

MagneRide was first used by General Motors in the Cadillac Seville STS (2002) and is now used as a standard suspension or an option in many models for Cadillac, Buick, Chevrolet, and other GM vehicles. It can also be found on some non-US vehicles such as: Holden Special Vehicles, Ferrari, and Audi. 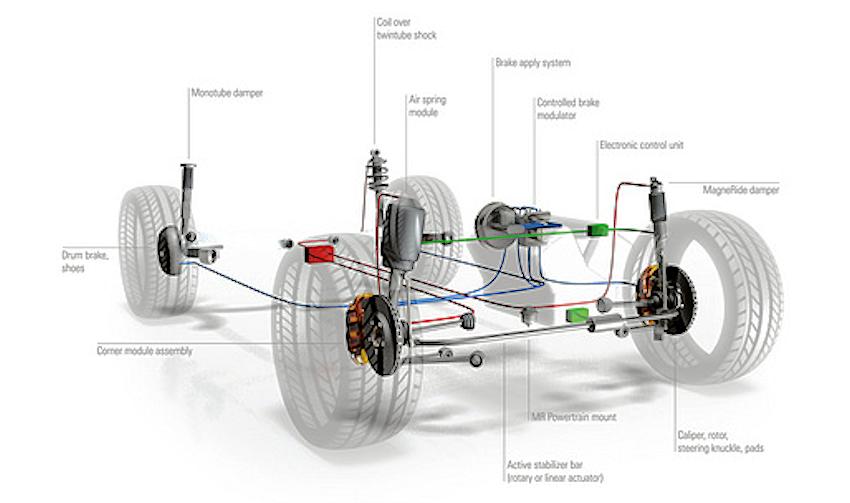