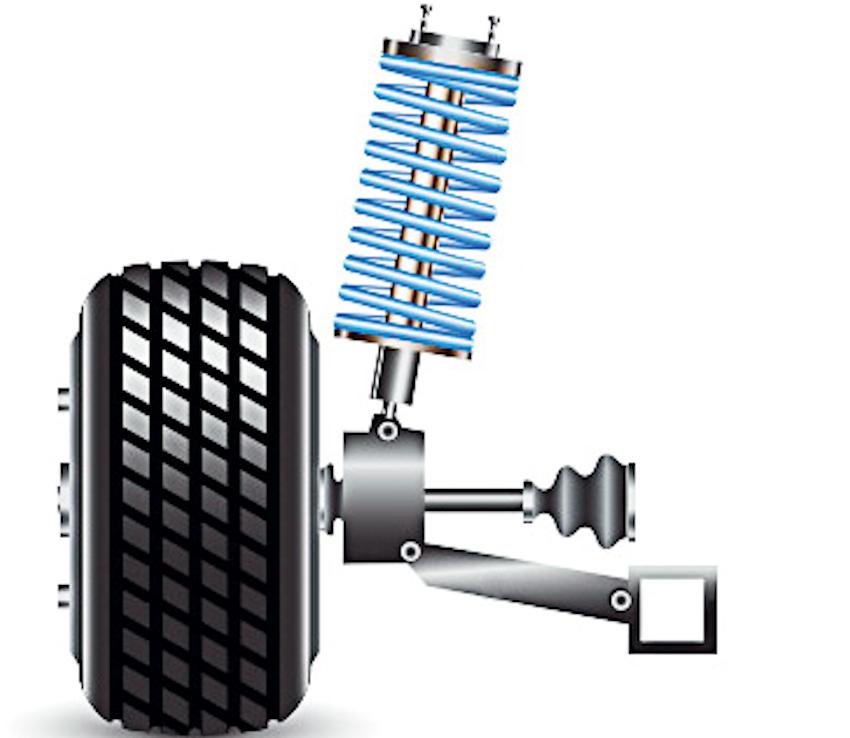 The MacPherson strut is a type of car suspension system which uses the axis of a telescopic damper as the upper steering pivot. It is widely used in modern vehicles and named after Earle S. MacPherson, who developed the design.

The first car to feature MacPherson struts was the 1949 Ford Vedette, and it was also adopted in the 1951 Ford Consul and later Zephyr. MacPherson originally created the design for use at all four wheels (Mitsubishi Starion, for example), but in practice it is more commonly used for the front suspension only, where it provides a steering pivot (kingpin) as well as a suspension mounting for the wheel.

MacPherson struts consist of a wishbone or a substantial compression link stabilized by a secondary link which provides a bottom mounting point for the hub or axle of the wheel. This lower arm system provides both lateral and longitudinal location of the wheel. The upper part of the hub is rigidly fixed to the inner part of the strut proper, the outer part of which extends upwards directly to a mounting in the body shell of the vehicle.

To be really successful, the MacPherson strut required the introduction of unibody (or monocoque) construction, because it needs a substantial vertical space and a strong top mount, which unibodies can provide, while benefiting them by distributing stresses.The strut will usually carry both the coil spring on which the body is suspended and the shock absorber, which is usually in the form of a cartridge mounted within the strut (see coilover). The strut also usually has a steering arm built into the lower inner portion. The whole assembly is very simple and can be preassembled into a unit; also by eliminating the upper control arm, it allows for more width in the engine compartment, which is useful for smaller cars, particularly with transverse-mounted engines such as most front wheel drive vehicles have. It can be further simplified, if needed, by substituting an anti-roll bar (torsion bar) for the radius arm. For those reasons, it has become almost ubiquitous with low cost manufacturers. Furthermore, it offers an easy method to set suspension geometry.

Although it is a popular choice, due to its simplicity and low manufacturing cost, the design has a few disadvantages in the quality of ride and the handling of the car. Geometric analysis shows it cannot allow vertical movement of the wheel without some degree of either camber angle change, sideways movement, or both. It is not generally considered to give as good handling as a double wishbone suspension, because it allows the engineers less freedom to choose camber change and roll center.

Another drawback is that it tends to transmit noise and vibration from the road directly into the body shell, giving higher noise levels and a "harsh" feeling to the ride compared with double wishbones, requiring manufacturers to add extra noise reduction or cancellation and isolation mechanisms.

Despite these drawbacks, the MacPherson strut setup is still used on high performance cars such as the Porsche 911, several Mercedes-Benz models and lower BMWs models (including the new Mini but excluding the 2007 X5,2009 7-series, 2011 5-series and 5-series GT).

The Porsche 911 up until the 1989 model year (964) use MacPherson strut designs that do not have coil springs, using a torsion bar suspension instead.

My set of Honda Civic vti struts front and rear 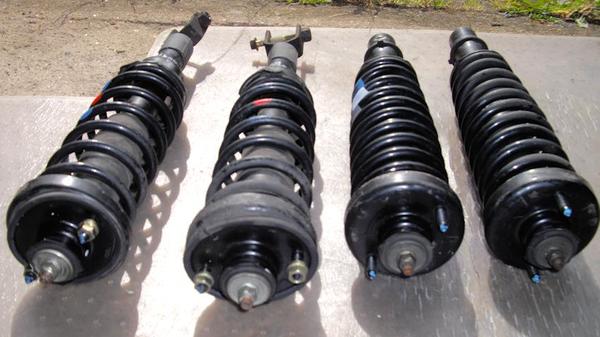