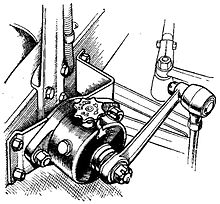 Hydraulic shock absorbers appeared as a development to replace the previous friction disks. These had, at best, provided a constant damping force, no matter what the size or speed of the suspension movement. With a viscous device using hydraulic oil, the resistance force increased with speed, so providing better damping for larger suspension bumps.

The first hydraulic shock absorbers were of the rotary vane pattern. These consisted of a cylindrical oil-filled body, bolted to the chassis. A lever arm was attached to the axle and inside the cylinder, this rotated a spindle carrying a vane or paddle. This vane had only a small hole in it, through which the hydraulic oil could pass. Resistance to flow through the hole provided the damping effect.

These were first developed by Maurice Houdaille around 1906, but remained largely ignored in favour of the simpler friction devices for some years.

This type was most common pre-war, although Ferrari contained to use the Houdaille vane-type for Formula One racing cars into the late 1950s.

A post-war development was the lever shock absorber. This had a large cast body containing a cylinder and pistons attached to a similar spindle and lever arm. Some used a pair of pistons for bump and rebound, others used a single double-acting piston. Flow of hydraulic oil around the piston took place through valves mounted in the body. Separate valves were provided for each direction, giving the useful feature of a different resistance to bump and rebound. These valves were sometimes easily adjustable from outside the damper body.