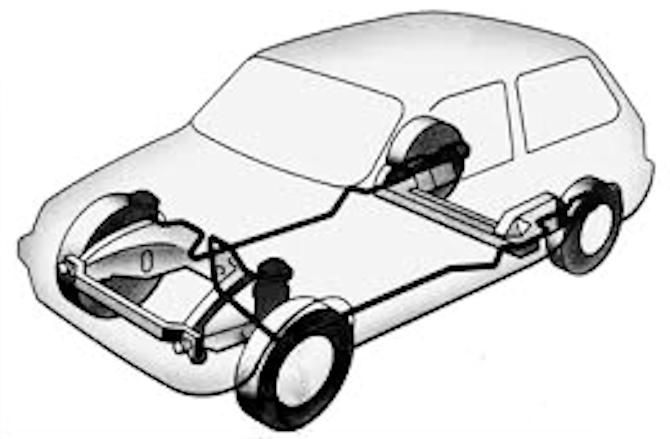 Hydrolastic is a type of space-efficient automotive suspension system used in many cars produced by British Motor Corporation (BMC) and its successor companies.

Invented by famous British rubber engineer Alex Moulton, and first used on the 1962 BMC project ADO16 under designer Alec Issigonis (of Mini fame), later to be launched as the Morris 1100.

The system replaces the separate springs and dampers of a conventional suspension system with integrated, space efficient, fluid filled, displacer units, which are interconnected between the front and rear wheels on each side of the vehicle. The official recipe for genuine BMC/MG Rover fluid is as follows:

Although the official recipe contains triethanolamine phosphate and sodium mercaptobenzothiazole, many home mechanics refill the system without these two ingredients, and use only alcohol (methylated spirits) and concentrated glycol antifreeze in a 50/50 ratio.

Each displacer unit contains a rubber spring, and damping is achieved by the displaced fluid passing through rubber valves. The displaced fluid passes to the displacer of the paired wheel, thus providing a dynamic interaction between front and rear wheels. When a front wheel encounters a bump fluid is transferred to the corresponding rear displacer then lowers the rear wheel, hence lifting the rear, minimising pitch associated with the bump. Naturally the reverse occurs when it is a rear wheel that encounters a bump. This effect is particularly good on small cars as small wheelbase vehicles are more affected by pitching than long wheelbase vehicles.

Jon Pressnell suggests in his book that the hydropneumatic suspension of the Citroën DS motivated Issigonis and Moulton, who were at the time of the launch of the DS working on a rubber and fluid suspension system themselves. Pressnell also suggests that the complexity of the Citroën system encouraged Moulton to develop a much simpler system.

In a magazine interview for 'CAR' magazine in the late 1980s, Dr Moulton stated that he and Issigonis had also studied the Citroën 2CV in the 1950s, which featured fore/aft interconnected steel springs. They particularly wished to address the comical lack of roll stiffness of that car with the system that they were designing.

Hydragas is a type of automotive suspension system used in many cars produced by British Leyland and its successor companies.

Invented by British automotive engineer Alex Moulton, Hydragas is an evolution of the previous Hydrolastic system. It was first introduced in 1973 in the Austin Allegro and was later fitted to the 1975 Princess and its successor, the 1982 Austin Ambassador. Both systems attempt to address the ride-handling compromise of car suspension by interconnecting the suspension of the front and rear of the car in some way. Hydragas attempted to perform the same function and advantages as the hydropneumatic system developed by Citroën, but without its attendant complexity.

The heart of the system are the displacer units, which are pressurised spheres containing nitrogen gas. These replace the conventional steel springs of a regular suspension design. The means for pressurising the gas in the displacers is done by pre-pressurising a hydraulic fluid, and then connecting the displacer to its neighbour on the other axle. This is unlike the Citroën system, which uses hydraulic fluid continuously pressurised by an engine-driven pump and regulated by a central pressure vessel.

Despite early problems (the Allegro version of Hydragas was found seriously wanting), it was gradually developed into an effective and efficient alternative to steel springs on later BL/Rover Group models such as the Austin Metro and MGF.

The Austin Maxi was the only in production car to feature both systems.. The Maxi featured 1100 designed Hydrolastic Units with the regulator valve fitted with the interconnection pipe. However in 1978 production of Hydrolastic bottles at Dunlop came to an end and BL modified the Leyland Princess Hydragas bottles to fit. This involved fitting a new front subframe design,with a larger diameter horizontal chamber in the subframe.