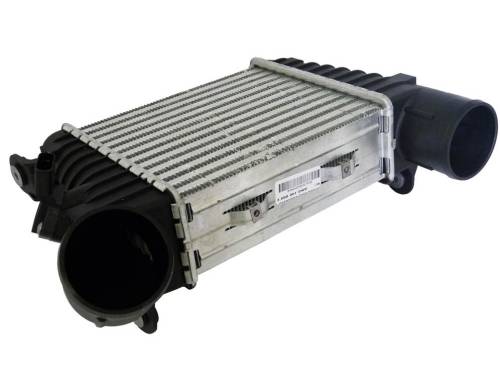 A charge air cooler is used to cool engine air after it has passed through a turbocharger, but before it enters the engine. The idea is to return the air to a lower temperature, for the optimum power for the combustion process within the engine.Charge air coolers range in size depending on the engine. The smallest are most often referred to as intercoolers and are attached to automobile engines or truck engines. The largest are reserved for use on huge marine diesel engines, and can weigh over 2 tonnes

Marine diesel engine charge-air coolers are still manufactured in Europe, despite the very largest engines mostly being built in the Far East. Vestas aircoil A/S and GEA are the oldest makers still in business.

Another cooler would be positioned after the second stage, which was the final compressor stage, and that was the "aftercooler". An aftercooler was the cooler whose outlet fed the engine.

A charge-air cooler is simply an all-encompassing term, meaning that it cools the turbo's air charge before it is routed into the engine. Usually a charge-air cooler means an air-to-air cooler where the heat is rejected using ambient air flowing through the heat exchanger, much like the engine's coolant radiator. While the multi-stage turbocharger systems are still in use in some tractor pull classes, selected high-performance diesels, and are also being used on newer late model commercial diesels, the term intercooler and aftercooler are used synonymously today. The term intercooler is widely used to mean in-between the Turbocharger and the engine. Both terms, intercooler or aftercooler, are correct, but this is the origin of the two terms that are used interchangeably by all levels of experts.

An intercooler, or "Charge-Air Cooler", is an air-to-air or air-to-liquid heat exchange device used on turbocharged and supercharged (forced induction) internal combustion engines to improve their volumetric efficiency by increasing intake air-charge density through isochoric cooling. A decrease in air intake temperature provides a denser intake charge to the engine and allows more air and fuel to be combusted per engine cycle, increasing the output of the engine.

The inter prefix in the device name originates from historic compressor designs. In the past, aircraft engines were built with Charge-Air Coolers that were installed between multiple stages of supercharging, thus the designation of inter. Modern automobile designs are technically designated aftercoolers because of their placement at the end of supercharging chain. This term is now considered archaic in modern automobile terminology since most forced induction vehicles have single-stage superchargers or turbochargers. In a vehicle fitted with two-stage turbocharging, it is possible to have both an intercooler (between the two turbocharger units) and an aftercooler (between the second-stage turbo and the engine). In general, an intercooler or aftercooler is said to be a Charge-Air Cooler