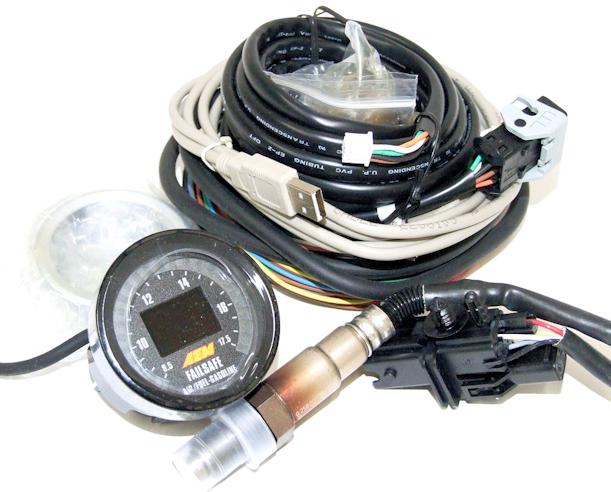 The original narrow-band oxygen sensors became factory installed standard in the late 1970s and early 80s. In recent years, a newer and much more accurate wide-band sensor, though more expensive, has become available.

Most stand-alone narrow-band meters have 10 LEDs and some have more. Also common, narrow band meters in round housings with the standard mounting 2 1/16" and 2 5/8" diameters, as other types of car 'gauges'. These usually have 10 or 20 LEDs. Analogue 'needle' style gauges are also available.

As stated above, there are wide-band meters that stand alone or are mounted in housings. Nearly all of these show the air–fuel ratio on a numeric display, since the wide-band sensors provide a much more accurate reading. And since they use more accurate electronics, these meters are more expensive.

Lean mixtures improve the fuel economy but also cause sharp rises in the amount of nitrogen oxides (NOX). If the mixture becomes too lean, the engine may fail to ignite, causing misfire and a large increase in unburned hydrocarbon (HC) emissions. Lean mixtures burn hotter and may cause rough idle, hard starting and stalling, and can even damage the catalytic converter, or burn valves in the engine. The risk of spark knock/engine knocking (detonation) is also increased when the engine is under load.

Mixtures that are richer than stoichiometric allow for greater peak engine power when using vapourized liquid fuels, due to the cooling effect of the evaporating fuel. This increases the intake oxygen density, allowing for more fuel to be combusted and more power developed. The ideal mixture in this type of operation depends on the individual engine. For example, engines with forced induction such as turbochargers and superchargers typically require a richer mixture under wide open throttle than naturally aspirated engines. Forced induction engines can be catastrophically damaged by burning too lean for too long. The leaner the air–fuel mixture, the higher the combustion temperature is inside the cylinder. Too high a temperature will destroy an engine – melting the pistons and valves. This can happen if you port the head and/or manifolds or increase boost without compensating by installing larger or more injectors, and/or increasing the fuel pressure to a sufficient level. Conversely, engine performance can be lessened by increasing fuelling without increasing air flow into the engine.

Oxygen sensors are installed in the exhaust system of the vehicle, attached to the engine's exhaust manifold, the sensor measures the ratio of the air–fuel mixture.

As mentioned above, there are two types of sensors available; narrow band and wide band. Narrow-band sensors were the first to be introduced. The wide-band sensor was introduced much later.

A narrow-band sensor has a nonlinear output, and switches between the thresholds of lean (ca 100–200 mV) and rich (ca 650–800 mV) areas very steeply. Narrow-band sensors are temperature-dependent. If the exhaust gases become warmer, the output voltage in the lean area will rise, and in the rich area it will be lowered. Consequently, a sensor, without pre-heating, has a lower lean-output and a higher rich-output, possibly even exceeding 1 Volt. The influence of temperature to voltage is smaller in the lean mode than in the rich mode.

The engine control unit (ECU) when operating in "closed loop" tend to maintain 0 oxygen (thus a stoichiometric balance), wherein the air–fuel mixture is approximately 14.7 times the mass of air to fuel for gasoline. This ratio maintains a "neutral" engine performance (lower fuel consumption yet decent engine power and minimal pollution).

The average level of the sensor is near to 450 mV. Since narrow band sensors cannot output a fixed voltage level between the lean and the rich areas, the ECU controls the engine by providing the mixture between lean (and rich) in such a sufficiently fast manner by means of shorter (or longer)time of signal to injectors, so the average level becomes as said ca 450 mV.

A wide-band sensor, on the other hand, has a very linear output, 0–5 V, and is not temperature dependent.

Which type of air–fuel ratio meter to be used

In high-performance tuning applications, the wide-band system is desirable.