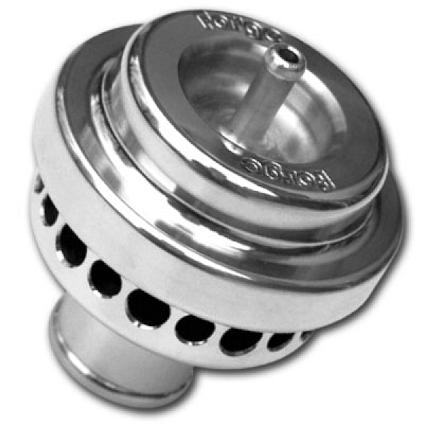 A blowoff valve (BOV) or dump valve is a pressure release system present in most turbocharged engines.

Its purpose is to prevent compressor surge, and reduce wear on the turbocharger and engine. Blowoff valves relieve the damaging effects of compressor "surge loading" by allowing the compressed air to vent to the atmosphere, making a distinct hissing sound, or recirculated into the intake upstream of the compressor inlet.

In the case where a mass airflow sensor (MAF) is used and is located upstream from the blowoff valve, the engine control unit (ECU) will inject excess fuel because the atmospherically vented air is not subtracted from the intake charge measurements. The engine then briefly operates with a fuel-rich mixture after each valve actuation.

The rich mixing can lead to hesitation or even stalling of the engine when the throttle is closed, a situation that worsens with higher boost pressures. Occasional events of this type may be only a nuisance, but frequent events can eventually foul the spark plugs and destroy the catalytic converter, as the inefficiently combusted fuel produces soot (excess carbon) and unburned fuel in the exhaust flow can produce soot in the converter and drive the converter beyond its normal operating temperature range.

An alternative method for utilizing both a MAF and a blowoff valve is to have the MAF located down stream between the intercooler and the throttle plate. This is known as Blow-through rather than the traditional Draw-through set up. Care must be taken as to the position of the MAF to prevent damage to the sensitive element. For example, on a SR20DE motor, the MAF must be at least 12" from the throttle plate, and the blowoff valve must be 6" from the MAF sensor. By using a blow-through method, the MAF won't be affected by the blowoff valve opening as the pressure is vented before the air reaches the MAF.

One approach used to mitigate the problem has been to reduce the boost pressure, which reduces the required venting volume and yields less charge over-calculation by the ECU. The air can also be recirculated back into the intake, a typical stock setup for cars with an upstream MAF sensor. The situation can also be corrected by switching the fuel metering system over to a manifold absolute pressure sensor, a conversion that usually requires a compatible aftermarket ECU or piggy-back fuel controller. The MAP sensor monitors the absolute pressure in the manifold at all times and will correctly detect the change that occurs when the valve vents, allowing the ECU to reduce fuel metering accordingly.