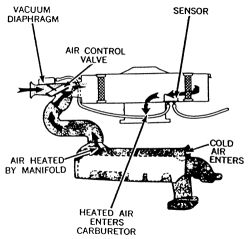 Carburetor, carburettor, carburator, carburettor heat (usually abbreviated to 'carb heat') is a system used in automobile and piston-powered light aircraft engines to prevent or clear carburetor icing. It consists of a moveable flap which draws hot air into the engine intake. The air is drawn from the heat stove, a metal plate around the (very hot) exhaust manifold.

Icing occurs when the atmospheric air contains significant levels of water vapor; as the air is drawn into the engine through a carburetor it is cooled sufficiently to cause that vapor to condense out and freeze on the butterfly valve. This cooling has two causes: the air pressure drops due to the expansion caused by engine suction and the increase in speed through the butterfly valve (in part-throttle operation) which drops the air temperature; and the liquid gasoline being introduced into the airstream must evaporate, and the heat of evaporation is extracted from the airstream, cooling it. The temperature in the carburetor can drop below the freezing point of water, and if the air is humid, ice can form inside the carburetor. As the ice builds up, less air can pass through the carburetor, causing a drop in power and, in severe cases, the engine will eventually stall.

Temperature drops of 20°C (36°F) or more are often encountered within the carburetor, so ice can build up even when the outside air temperature is well above freezing. Perhaps paradoxically, cold winter weather is less prone to icing, since cold air contains much less moisture. A warm day with high humidity is considered the most likely scenario for carburetor icing. Since there is less air acceleration through the carburetor at full-throttle operation, icing is usually not a problem then.

Carburetor heat uses hot air drawn from the heat exchanger or heat stove (a metal plate around the exhaust manifold) to raise the temperature in the venturi section high enough to prevent or remove any ice buildup. Because hot air is less dense than cold air, engine power will drop when carburetor heat is used.

Engines equipped with fuel injection do not require carb heat as they are not as prone to icing - the gasoline is injected as a steady stream just upstream of the intake valve, so evaporation occurs as the fuel/air mixture is being drawn into the cylinder, where metal temperatures are higher. The exception is monopoint or TBI injection systems which spray fuel onto the throttle plate.

Some multipoint injection engines route engine coolant through the throttle body to prevent ice buildup during prolonged idling. This prevents ice from forming around the throttle plate but does not draw large amounts of hot air into the engine as carburetor heat does.

In cars, carburetor heat may be controlled automatically (by a wax-pellet driven flap in the air intake) or manually (often by rotating the air cleaner cover between 'summer' and 'winter' settings). The air filter bypass found on aircraft engines is not used, because the air filter on automobiles is not exposed to the elements, and because the carburetor is usually mounted closer to the cylinder block, so that enough engine heat is transmitted through the structure to keep the venturi walls warm. However, this is not always sufficient, and some automobiles have a history of temporary engine failure (power output drops to zero until the engine sits long enough for the engine heat to melt the accumulated ice) during rain or snow conditions.

Automobile engines may also use a heat riser, which heats the air/fuel mixture after it has left the carburetor; this is a low temperature fuel economy and driveability feature with most benefits seen at low rpms.