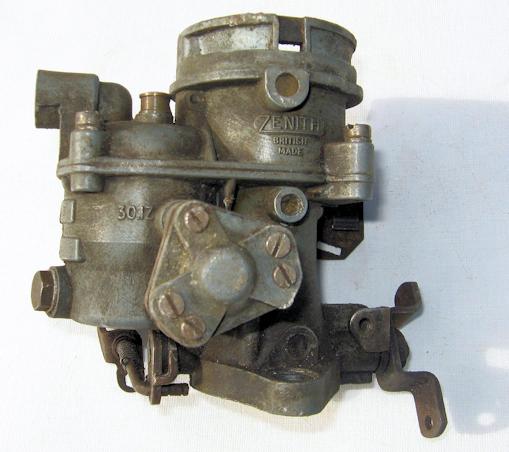 Zenith Carburetter Company was a British company making carburettors. In 1955 they joined with their major pre-war rival Solex Carburettors and over time the Zenith brand name fell into disuse. The rights to the Zenith designs were owned by Solex UK (a daughter company of Solex in France).

While better known for their much later products, Zeniths were standard equipment on some very early, brass era automobiles, including the Scripps-Booth.

The big products of Zenith were the Zenith-Stromberg carburettors used in MGs, 1967-1975 Jaguar E-types, Saab 99s, 90s and early 900s, 1969-1972 Volvo 140s and 164s, and some 1960s and 1970s Triumphs, for instance the Triumph Spitfire used Zenith IV carburettors in the North American market. In Australia the CD-150 and CDS-175 models were fitted to the high performance triple carburettored Holden Torana GTR-XU1.

Designed and developed by Denis Barbet (Standard Triumph) and Harry Cartwrite (Zenith) in order to break SU's patents, the Stromberg carburettor features a variable venturi controlled by a piston. This piston has a long, tapered, conical metering rod (usually referred to as a "needle") that fits inside an orifice ("jet") which admits fuel into the airstream passing through the carburettor. Since the needle is tapered, as it rises and falls it opens and closes the opening in the jet, regulating the passage of fuel, so the movement of the piston controls the amount of fuel delivered, depending on engine demand.

The flow of air through the venturi creates a reduced static pressure in the venturi. This pressure drop is communicated to the upper side of the piston via an air passage. The underside of the piston is in communication with atmospheric pressure. The difference in pressure between the two sides of the piston creates a force tending to lift the piston. Counteracting this force is the weight of the piston and the force of a compression spring which is compressed by the piston rising; because the spring is operating over a very small part of its possible range of extension, the spring force approximates to a constant force. Under steady state conditions the upwards and downwards forces on the piston are equal and opposite, and the piston does not move.

Since the position of the piston controls the position of the needle in the jet, and thus the open area of the jet, while the depression in the venturi sucking fuel out of the jet remains constant, the rate of fuel delivery is always a definite function of the rate of air delivery. The precise nature of the function is determined by the tapered profile of the needle. With appropriate selection of the needle, the fuel delivery can be matched much more closely to the demands of the engine than is possible with the more common fixed-venturi carburettor, an inherently inaccurate device whose design must incorporate many complex fudges to obtain usable accuracy of fuelling. The well-controlled conditions under which the jet is operating also make it possible to obtain good and consistent atomisation of the fuel under all operating conditions.

This self-adjusting nature makes the selection of the maximum venturi diameter (colloquially, but inaccurately, referred to as "choke size") much less critical than with a fixed-venturi carburettor.

To prevent erratic and sudden movements of the piston it is damped by light oil in a dashpot (under the white plastic cover in the picture) which requires periodic topping up.

One of the major drawbacks of the constant depression carburettor is in high performance applications. Since it relies on restricting air flow in order to produce enrichment during acceleration, the throttle response lacks punch. By contrast, the fixed choke design adds extra fuel under these conditions using its accelerator pump. 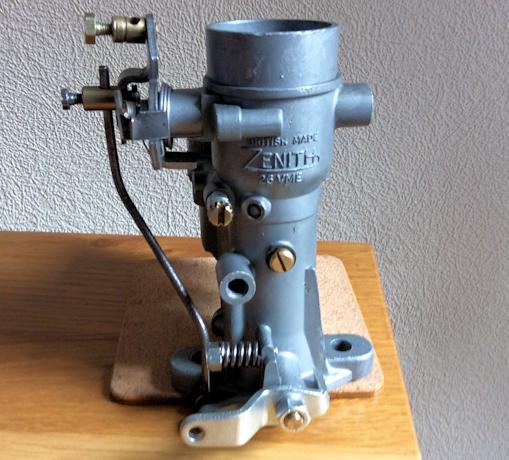