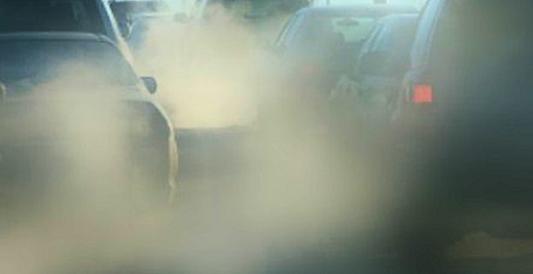 Diesel particulate matter (DPM), sometimes also called diesel exhaust particles (DEP), is the particulate component of diesel exhaust, which includes diesel soot and aerosols such as ash particulates, metallic abrasion particles, sulfates, and silicates. When released into the atmosphere, DPM can take the form of individual particles or chain aggregates, with most in the invisible sub-micrometre range of 100 nanometers, also known as ultrafine particles (UFP) or PM0.1.

The main particulate fraction of diesel exhaust consists of fine particles. Because of their small size, inhaled particles may easily penetrate deep into the lungs. The rough surfaces of these particles makes it easy for them to bind with other toxins in the environment, thus increasing the hazards of particle inhalation.

The types and quantities of nanoparticles can vary according to operating temperatures and pressures, presence of an open flame, fundamental fuel type and fuel mixture, and even atmospheric mixtures. As such, the resulting types of nanoparticles from different engine technologies and even different fuels are not necessarily comparable. In general, the usage of biodiesel and biodiesel blends results in decreased pollution. One study has shown that the volatile component of 95% of diesel nanoparticles is unburned lubricating oil. Long term effects still need to be further clarified, as well as the effects on susceptible groups of people with cardiopulmonary diseases.

Diesel engines can produce black soot (or more specifically diesel particulate matter) from their exhaust. The black smoke consists of carbon compounds that were not combusted, because of local low temperatures where the fuel is not fully atomized. These local low temperatures occur at the cylinder walls, and at the outside of large droplets of fuel. At these areas where it is relatively cold, the mixture is rich (contrary to the overall mixture which is lean). The rich mixture has less air to burn and some of the fuel turns into a carbon deposit. Modern car engines use a diesel particulate filter (DPF) to capture carbon particles and then intermittently burn them using extra fuel injected directly into the filter. This prevents carbon buildup at the expense of wasting a small quantity of fuel.

The full load limit of a diesel engine in normal service is defined by the "black smoke limit", beyond which point the fuel cannot be completely combusted. As the "black smoke limit" is still considerably lean of stoichiometric, it is possible to obtain more power by exceeding it, but the resultant inefficient combustion means that the extra power comes at the price of reduced combustion efficiency, high fuel consumption and dense clouds of smoke. This is only done in specialized applications (such as tractor pulling competitions) where these disadvantages are of little concern.

When starting from cold, the engine's combustion efficiency is reduced because the cold engine block draws heat out of the cylinder in the compression stroke. The result is that fuel is not combusted fully, resulting in blue and white smoke and lower power outputs until the engine has warmed. This is especially the case with indirect injection engines, which are less thermally efficient. With electronic injection, the timing and length of the injection sequence can be altered to compensate for this. Older engines with mechanical injection can have mechanical and hydraulic governor control to alter the timing, and multi-phase electrically controlled glow plugs, that stay on for a period after start-up to ensure clean combustion—the plugs are automatically switched to a lower power to prevent their burning out.

This is a list of chemical components that have been found in diesel exhaust.

Some problems associated with the exhaust gases (nitrogen oxides, sulfur oxides) can be mitigated with further investment and equipment; some diesel cars now have catalytic converters in the exhaust.

All diesel engine exhaust emissions can be significantly reduced by using biodiesel fuel. Oxides of nitrogen do increase from a vehicle using biodiesel, but they too can be reduced to levels below that of fossil fuel diesel, by changing fuel injection timing