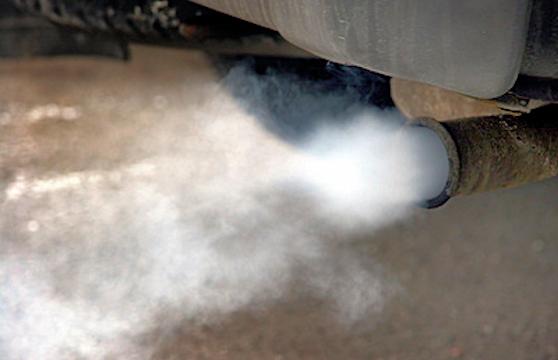 Emissions of many air pollutants have been shown to have variety of negative effects on public health and the natural environment. Emissions that are principal pollutants of concern include:

Throughout the 1950s and 1960s, various federal, state and local governments in the United States conducted studies into the numerous sources of air pollution. These studies ultimately attributed a significant portion of air pollution to the automobile, and concluded air pollution is not bounded by local political boundaries. At that time, such minimal emission control regulations as existed in the U.S. were promulgated at the municipal or, occasionally, the state level. The ineffective local regulations were gradually supplanted by more comprehensive state and federal regulations. By 1967 the State of California created the California Air Resources Board, and in 1970, the federal United States Environmental Protection Agency (EPA) was established. Both agencies, as well as other state agencies, now create and enforce emission regulations for automobiles in the United States. Similar agencies and regulations were contemporaneously developed and implemented in Canada, Western Europe, Australia, and Japan.

The first effort at controlling pollution from automobiles was the PCV (positive crankcase ventilation) system. This draws crankcase fumes heavy in unburned hydrocarbons — a precursor to photochemical smog — into the engine's intake tract so they are burned rather than released unburned from the crankcase into the atmosphere. Positive crankcase ventilation was first installed on a widespread basis by law on all new 1961-model cars first sold in California. The following year, New York required it. By 1964, most new cars sold in the U.S. were so equipped, and PCV quickly became standard equipment on all vehicles worldwide

By the 1974 model year, the emission standards had tightened such that the de-tuning techniques used to meet them were seriously reducing engine efficiency and thus increasing fuel usage. The new emission standards for 1975 model year, as well as the increase in fuel usage, forced the invention of the catalytic converter for after-treatment of the exhaust gas. This was not possible with existing leaded gasoline, because the lead residue contaminated the platinum catalyst. In 1972, General Motors proposed to the American Petroleum Institute the elimination of leaded fuels for 1975 and later model year cars. The production and distribution of unleaded fuel was a major challenge, but it was completed successfully in time for the 1975 model year cars. All modern cars are now equipped with catalytic converters and leaded fuel is nearly impossible to buy in most First World countries.

The agencies charged with regulating exhaust emissions vary from jurisdiction to jurisdiction, even in the same country. For example, in the United States, overall responsibility belongs to the EPA, but due to special requirements of the State of California, emissions in California are regulated by the Air Resources Board. In Texas, the Texas Railroad Commission is responsible for regulating emissions from LPG-fueled rich burn engines (but not gasoline-fueled rich burn engines).

The European Union has control over regulation of emissions in EU member states; however, many member states have their own government bodies to enforce and implement these regulations in their respective countries. In short, the EU forms the policy (by setting limits such as the European emission standard) and the member states decide how to best implement it in their own country.

In the United Kingdom, matters concerning environmental policy are what is known as "devolved powers" which means, each of the constituent countries deals with it separately through their own government bodies set up to deal with environmental issues in their respective country:

However, many UK-wide policies are handled by the Department of the Environment Food and Rural Affairs (DEFRA) and they are still subject to EU regulations.

Advances in engine and vehicle technology continually reduce the toxicity of exhaust leaving the engine, but these alone have generally been proved insufficient to meet emissions goals. Therefore, technologies to detoxify the exhaust are an essential part of emissions control.

One of the first-developed exhaust emission control systems is secondary air injection. Originally, this system was used to inject air into the engine's exhaust ports to provide oxygen so unburned and partially burned hydrocarbons in the exhaust would finish burning. Air injection is now used to support the catalytic converter's oxidation reaction, and to reduce emissions when an engine is started from cold. After a cold start, an engine needs a fuel-air mixture richer than what it needs at operating temperature, and the catalytic converter does not function efficiently until it has reached its own operating temperature. The air injected upstream of the converter supports combustion in the exhaust headpipe, which speeds catalyst warmup and reduces the amount of unburned hydrocarbon emitted from the tailpipe.

In the United States and Canada, many engines in 1973 and newer vehicles (1972 and newer in California) have a system that routes a metered amount of exhaust into the intake tract under particular operating conditions. Exhaust neither burns nor supports combustion, so it dilutes the air/fuel charge to reduce peak combustion chamber temperatures. This, in turn, reduces the formation of NOx.

The catalytic converter is a device placed in the exhaust pipe, which converts hydrocarbons, carbon monoxide, and NOx into less harmful gases by using a combination of platinum, palladium and rhodium as catalysts. 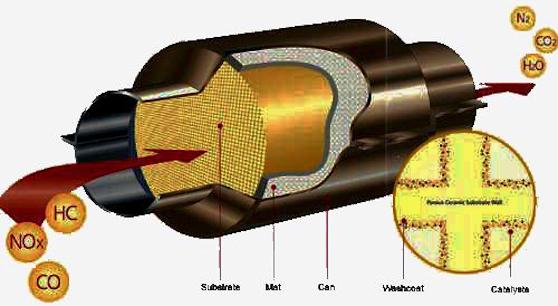 Evaporative emissions are the result of gasoline vapors escaping from the vehicle's fuel system. Since 1971, all U.S. vehicles have had fully sealed fuel systems that do not vent directly to the atmosphere; mandates for systems of this type appeared contemporaneously in other jurisdictions. In a typical system, vapors from the fuel tank and carburetor bowl vent (on carbureted vehicles) are ducted to canisters containing activated carbon. The vapors are adsorbed within the canister, and during certain engine operational modes fresh air is drawn through the canister, pulling the vapor into the engine, where it burns.

In 1966, the first emission test cycle was enacted in the State of California measuring tailpipe emissions in PPM (parts per million).

Some cities are also using a technology developed by Dr. Donald Stedman of the University of Denver, which uses lasers to detect emissions while vehicles pass by on public roads, thus eliminating the need for owners to go to a test center. Stedman's laser detection of exhaust gases is commonly used in metropolitan areas.

Use of emission test data

Emission test results from individual vehicles are in many cases compiled to evaluate the emissions performance of various classes of vehicles, the efficacy of the testing program and of various other emission-related regulations (such as changes to fuel formulations) and to model the effects of auto emissions on public health and the environment. For example, the Environmental Working Group used California ASM emissions data to create an "Auto Asthma Index" that rates vehicle models according to emissions of hydrocarbons and nitrogen oxides, chemical precursors to photochemical smog.