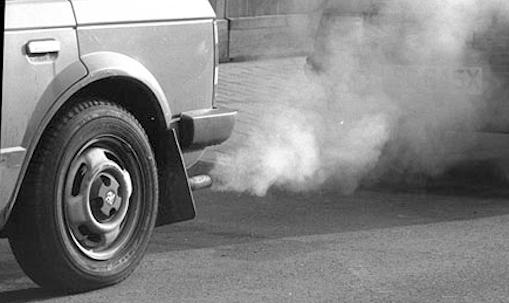 Exhaust gas or flue gas is emitted as a result of the combustion of fuels such as natural gas, gasoline/petrol, diesel fuel, fuel oil or coal. According to the type of engine, it is discharged into the atmosphere through an exhaust pipe, flue gas stack or propelling nozzle. It often disperses downwind in a pattern called an exhaust plume.

The largest part of most combustion gas is nitrogen (N2), water vapor (H2O) (except with pure-carbon fuels), and carbon dioxide (CO2) (except for fuels without carbon); these are not toxic or noxious (although carbon dioxide is generally recognized as a greenhouse gas that contributes to global warming). A relatively small part of combustion gas is undesirable noxious or toxic substances, such as carbon monoxide (CO) from incomplete combustion, hydrocarbons (properly indicated as CxHy, but typically shown simply as "HC" on emissions-test slips) from unburnt fuel, nitrogen oxides (NOx) from excessive combustion temperatures, Ozone (O3), and particulate matter (mostly soot).

In spark-ignition engines the gases resulting from combustion of the fuel and air mix are called exhaust gases. The composition varies from petrol to diesel engines, but is around these levels:

Exhaust gas from an internal combustion engine whose fuel includes nitromethane will contain nitric acid vapour, which when inhaled causes a muscular reaction making it impossible to breathe. People exposed to it should wear a gas mask.