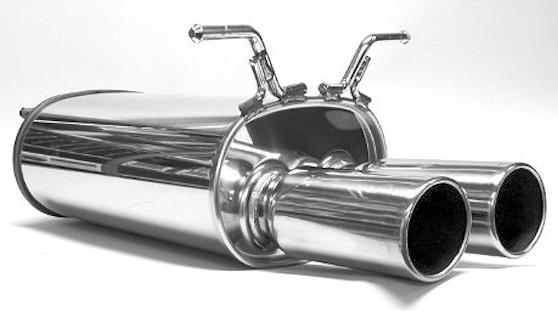 A muffler (or silencer in British English) is a device for reducing the amount of noise emitted by the exhaust of an internal combustion engine.

The US Patent for an Exhaust muffler for engines was awarded to Milton O. Reeves and Marshall T. Reeves of Columbus, Indiana of the Reeves Pulley Company on 11 May 1897. US Patent Office application No 582485 states that they have invented certain new and useful Improvements in Exhaust-Mufflers for engines

Mufflers are installed within the exhaust system of most internal combustion engines, although the muffler is not designed to serve any primary exhaust function. The muffler is engineered as an acoustic soundproofing device designed to reduce the loudness of the sound pressure created by the engine by way of Acoustic quieting. The majority of the sound pressure produced by the engine is emanated out of the vehicle using the same piping used by the silent exhaust gases absorbed by a series of passages and chambers lined with roving fiberglass insulation and/or resonating chambers harmonically tuned to cause destructive interference wherein opposite sound waves cancel each other out. An unavoidable side effect of muffler use is an increase of back pressure which decreases engine efficiency. This is because the engine exhaust must share the same complex exit pathway built inside the muffler as the sound pressure that the muffler is designed to mitigate.

Some vehicle owners remove or install an aftermarket muffler when Engine tuning in order to increase power output or reduce fuel consumption because of economic or environmental concerns, recreational pursuits such as motorsport and hypermiling and/or for personal aesthetic acoustical preferences. Although the legality of altering a motor vehicles OEM exhaust system varies by jurisdiction, in most developed parts of the world, modification of a vehicle's exhaust system is usually highly regulated if not strictly prohibited.

When the flow of exhaust gases from the engine to the atmosphere is obstructed to any degree, back pressure arises and the engine's efficiency, and therefore power, is reduced. Performance-oriented mufflers and exhaust systems thus strive to minimize back pressure by employing numerous technologies and methods to attenuate the sound. For the majority of such systems, however, the general rule of "more power, more noise"applies. Several such exhaust systems that utilize various designs and construction methods: 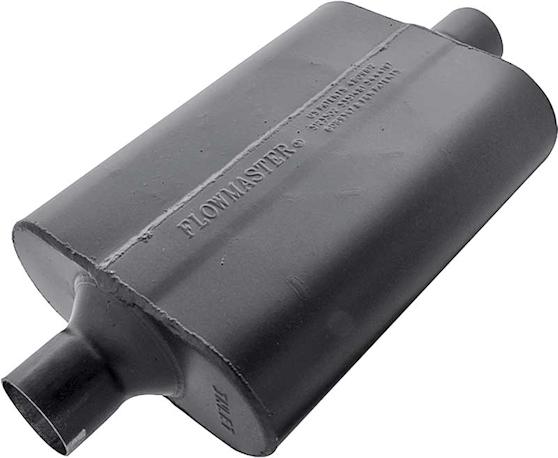