Fitting an after market  intercooler 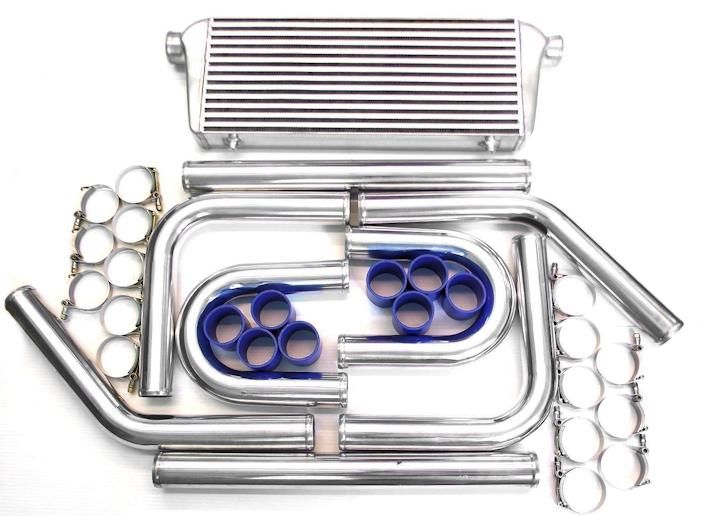 Because FMIC systems require open bumper design for optimal performance, the entire system is vulnerable to debris. Some engineers choose other mount locations due to this reliability concern. FMICs can be located in front of or behind the radiator, depending on the heat dissipation needs of the engine.

As well as allowing a greater mass of air to be admitted to an engine, intercoolers have a key role in controlling the internal temperatures in a turbocharged engine.

When fitted with a turbo (as with any form of supercharging), the engine's specific power is increased, leading to higher combustion and exhaust temperatures. The exhaust gases passing through the turbine section of the turbocharger are usually around 450 °C (840 °F), but can be as high as 1000 °C (1830 °F) under extreme conditions. This heat passes through the turbocharger unit and contributes to the heating of the air being compressed in the compressor section of the turbo.

If left uncooled, this hot air enters the engine, further increasing internal temperatures. This leads to a build-up of heat that will eventually stabilise, but this may be at temperatures in excess of the engine's design limits- 'hot spots' at the piston crown or exhaust valve can cause warping or cracking of these components. High air charge temperatures will also increase the possibility of pre-ignition or detonation. Detonation causes damaging pressure spikes in the engine's cylinders, which can quickly damage an engine.

These effects are especially found in modified or tuned engines running at very high specific power outputs. An efficient intercooler removes heat from the air in the induction system, preventing the cyclic heat build-up via the turbocharger, allowing higher power outputs to be achieved without damage.

Compression by the turbocharger causes the intake air to heat up and heat is added due to compressor inefficiencies (adiabatic efficiency). This is actually the greater cause of the increase in air temperature in an air charge. The extra power obtained from forced induction is due to the extra air available to burn more fuel in each cylinder.