Intercoolers increase the efficiency of the induction system by reducing induction air heat created by the turbocharger and promoting more thorough combustion. This removes the heat of compression (i.e., the temperature rise) that occurs in any gas when its pressure is raised or its unit mass per unit volume (density) is increased. A decrease in intake air charge temperature sustains use of a more dense intake charge into the engine, as a result of supercharging. The lowering of the intake charge air temperature also eliminates the danger of pre-detonation (knock) of the fuel/air charge prior to timed spark ignition. This preserves the benefits of more fuel/air burn per engine cycle, increasing the output of the engine. Intercoolers also eliminate the need for using the wasteful method of lowering intake charge temperature by the injection of excess fuel into the cylinders' air induction chambers, to cool the intake air charge, prior to its flowing into the cylinders. This wasteful practice (when intercoolers are not used) nearly eliminated the gain in engine efficiency from supercharging, but was necessitated by the greater need to prevent at all costs the engine damage that pre-detonation engine knocking causes.

The inter prefix in the device name originates from historic compressor designs. In the past, aircraft engines were built with charge air coolers that were installed between multiple stages of supercharging,thus the designation of inter. Modern automobile designs are technically designated aftercoolers because of their placement at the end of the supercharging chain. This term is now considered archaic in modern automobile terminology, since most forced-induction vehicles have single-stage superchargers or turbochargers, although "aftercooler" is still in common use in the piston-engined aircraft industry. In a vehicle fitted with two-stage turbocharging, it is possible to have both an intercooler (between the two turbocharger units) and an aftercooler (between the second-stage turbo and the engine). The JCB Dieselmax land speed record-holding car is an example of such a system. In general, an intercooler or aftercooler is said to be a charge-air cooler.

Intercoolers can vary dramatically in size, shape and design, depending on the performance and space requirements of the entire supercharger system. Common spatial designs are front mounted intercoolers (FMIC), top mounted intercoolers (TMIC) and hybrid mount intercoolers (HMIC). Each type can be cooled with an air-to-air system, air-to-liquid system, or a combination of both. 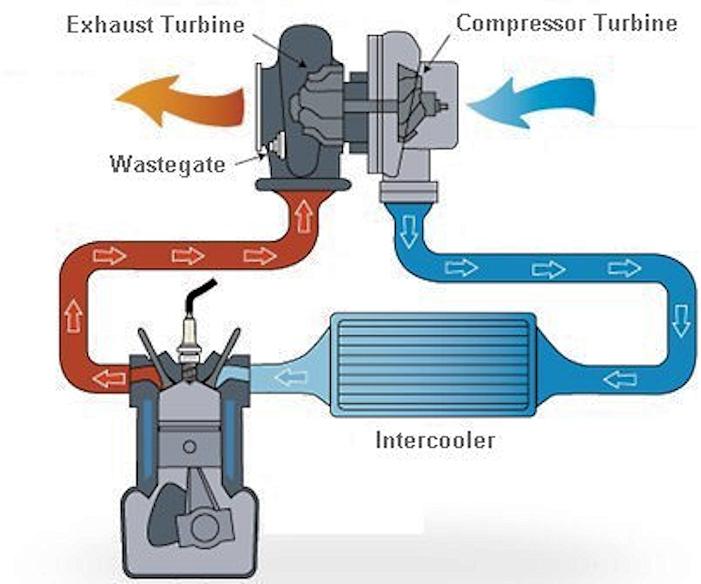 Turbochargers and superchargers are engineered to force more air mass into an engine's intake manifold and combustion chamber. Intercooling is a method used to compensate for heating caused by supercharging, a natural byproduct of the semi-adiabatic compression process. Increased air pressure can result in an excessively hot intake charge, significantly reducing the performance gains of supercharging due to decreased density. Increased intake charge temperature can also increase the cylinder combustion temperature, causing detonation, excessive wear, or heat damage to an engine block.

Passing a compressed and heated intake charge through an intercooler reduces its temperature (due to heat rejection) and pressure (due to flow restriction of fins). If the device is properly engineered, the relative decrease in temperature is greater than the relative loss in pressure, resulting a net increase in density. This increases system performance by recovering some losses of the inefficient compression process by rejecting heat to the atmosphere. Additional cooling can be provided by externally spraying a fine mist onto the intercooler surface, or even into the intake air itself, to further reduce intake charge temperature through evaporative cooling.

Intercoolers that exchange their heat directly with the atmosphere are designed to be mounted in areas of an automobile with maximum air flow. These types are mainly mounted in front mounted systems (FMIC). Cars such as the Nissan Skyline, Saab, Volvo 200 Series Turbo, Volvo 700 Series (and 900 series) turbo, Dodge SRT-4, 1st gen Mazda MX-6, Mitsubishi Lancer Evolution and Chevrolet Cobalt SS all use front mounted intercooler(s) mounted near the front bumper, in line with the car's radiator.

Many other turbo-charged cars, particularly where the aesthetics of the car are not to be compromised by unattractive top mount scoops, such as the Toyota Supra (JZA80 only), Nissan 300ZX Twin Turbo, Nissan Silvia (S13/14/14a/15), Nissan 180sx, Mitsubishi 3000gt, Saab 900, Volkswagen, Fiat Multipla, Audi TT, and Turbo Mitsubishi Eclipse use side-mounted air-to-air intercoolers (SMIC), which are mounted in the front corner of the bumper or in front of one of the wheels.

Some World Rally Championship cars use a reverse-induction system design whereby air is forced through ducts in the front bumper to a horizontally-mounted intercooler.