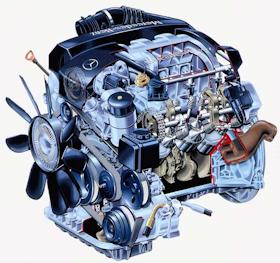 In internal combustion engines, a variable-length intake manifold (VLIM),variable intake manifold (VIM), or variable intake system (VIS) is an automobile internal combustion engine manifold technology. As the name implies, VLIM/VIM/VIS can vary the length of the intake tract - in order to optimise power and torque across the range of engine speed operation, as well as help provide better fuel efficiency. This effect is often achieved by having two separate intake ports, each controlled by a valve, that open two different manifolds - one with a short path that operates at full engine load, and another with a significantly longer path that operates at lower load.

There are two main effects of variable intake geometry:

Swirl
Variable geometry can create a beneficial air swirl pattern, or turbulence in the combustion chamber. The swirling helps distribute the fuel and form a homogeneous air-fuel mixture - this aids the initiation of the combustion process, helps minimise engine knocking, and helps facilitate complete combustion. At low revolutions per minute (rpm), the speed of the airflow is increased by directing the air through a longer path with limited capacity (i.e., cross-sectional area) - and this assists in improving low engine speed torque. At high rpms, the shorter and larger path opens when the load increases, so that a greater amount of air with least resistance can enter the chamber - this helps maximise 'top-end' power. In double overhead camshaft (DOHC) designs, the air paths may sometimes be connected to separate intake valves so the shorter path can be excluded by de-activating the intake valve itself.
Pressurisation
A tuned intake path can have a light pressurising effect similar to a low-pressure supercharger - due to Helmholtz resonance. However, this effect occurs only over a narrow engine speed band. A variable intake can create two or more pressurized "hot spots", increasing engine output. When the intake air speed is higher, the dynamic pressure pushing the air (and/or mixture) inside the engine is increased. The dynamic pressure is proportional to the square of the inlet air speed, so by making the passage narrower or longer the speed/dynamic pressure is increased. 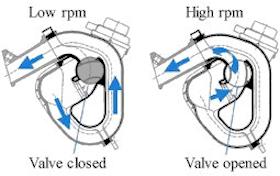 Many automobile manufacturers use similar technology with different names. Another common term for this technology is variable resonance induction system (VRIS).