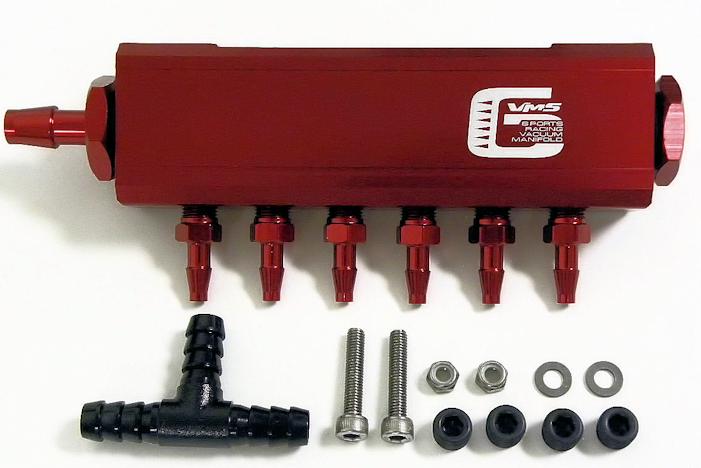 Manifold vacuum, or engine vacuum in an internal combustion engine is the difference in air pressure between the engine's intake manifold and Earth's atmosphere.

Manifold vacuum is an effect of a piston's movement on the induction stroke and the choked flow through a throttle in the intake manifold of an engine. It is a measure of the amount of restriction of airflow through the engine, and hence of the unused power capacity in the engine. In some engines, the manifold vacuum is also used as an auxiliary power source to drive engine accessories and for the crankcase ventilation system.

Manifold vacuum should not be confused with venturi vacuum, which is an effect that is exploited in carburetors to achieve a fixed mix ratio between fuel and air.

The rate of airflow through an internal combustion engine is an important factor determining the amount of power the engine generates. Most gasoline engines are controlled by limiting that flow with a throttle that restricts intake airflow, while a diesel engine is controlled by the amount of fuel supplied to the cylinder, and so has no "throttle" as such. Manifold vacuum is present in all naturally aspirated engines that use throttles (including carbureted and fuel injected gasoline engines using the otto cycle or the two-stroke cycle; diesel engines do not have throttle plates).

The mass flow through the engine is determined by the rotation rate of the engine, multiplied by the displacement of the engine, and the density of the intake stream in the intake manifold. In most applications the rotation rate is set by the application (engine speed -RPM- in a car or machinery speed in other applications). The displacement is dependent on the engine geometry, which is generally not adjustable while the engine is in use (although a handful of models do have this feature, see variable displacement). Restricting the input flow reduces the density (and hence pressure) in the intake manifold, reducing the amount of power that is produced. It is also a major source of engine drag (see engine braking), as the engine must pump material from the low-pressure intake manifold into the exhaust manifold (at ambient atmospheric pressure).

When the throttle is opened (in a car, the accelerator pedal is depressed), ambient air is free to fill the intake manifold, increasing the pressure (filling the vacuum). A carburetor or fuel injection system adds fuel to the airflow in the correct proportion, providing energy to the engine. When the throttle is opened all the way, the engine's air induction system is exposed to full atmospheric pressure, and maximum airflow through the engine is achieved. In a "naturally aspirated" engine, total engine output is thus determined by the ambient barometric pressure. Superchargers and turbochargers can "boost" manifold pressure to above atmospheric pressure.

Some modern engines with fuel injection have a MAP sensor which measures the manifold absolute pressure to control fuel flow.

Manifold vacuum may also be "ported" where the opening is placed so it is normally above the throttle plate at idle, but as the butterfly valve opens, the opening is effectively below it, and the opening sees nearly the full manifold vacuum. Ported vacuum is often used for distributors and emissions items.

Most automobiles use four-stroke Otto cycle engines with multiple cylinders attached to a single inlet manifold. During the induction stroke, the piston descends in the cylinder and the intake valve is open. As the piston descends it effectively increases the volume in the cylinder above it, setting up low pressure. Atmospheric pressure pushes air through the manifold and carburetor or fuel injection system, where it is mixed with fuel. Because multiple cylinders operate at different times in the engine cycle, there is almost constant pressure difference through the inlet manifold from carburetor to engine.

To control the amount of fuel/air mix entering the engine, a simple butterfly valve (the throttle) is generally fitted at the start of the intake manifold (just below the carburetor in carbureted engines). The butterfly valve is simply a circular disc fitted on a spindle, fitting inside the pipe work. It is connected to the accelerator pedal of the car, and is set to be fully open when the pedal is fully depressed and fully closed when the pedal is released. The butterfly valve often contains a small "idle cutout", a hole that allows small amounts of fuel/air mixture into the engine even when the valve is fully closed.

If the engine is operating under light or no load and low throttle, there is high manifold vacuum. As the throttle is opened, the engine speed increases rapidly. The engine speed is limited only by the amount of fuel/air mixture that is available in the manifold. Under full throttle and light load, other effects (such as valve float, turbulence in the cylinders, or ignition timing) limit engine speed so that the manifold pressure can increase—but in practice, parasitic drag on the internal walls of the manifold, plus the restrictive nature of the venturi at the heart of the carburetor, means that a low pressure will always be set up as the engine's internal volume exceeds the amount of the air the manifold is capable of delivering.

If the engine is operating under heavy load at wide throttle openings (such as accelerating from a stop or pulling the car up a hill) then engine speed is limited by the load and minimal vacuum will be created. Engine speed is low but the butterfly valve is fully open. Since the pistons are descending more slowly than under no load, the pressure differences are less marked and parasitic drag in the induction system is negligible. The engine pulls air into the cylinders at the full ambient pressure.

More vacuum is created in some situations. On deceleration or when descending a hill, the throttle will be closed and a low gear selected to control speed. The engine will be rotating fast because the road wheels and transmission are moving quickly, but the butterfly valve will be fully closed. The flow of air through the engine is strongly restricted by the throttle, producing a strong vacuum on the engine side of the butterfly valve which will tend to limit the speed of the engine. This phenomenon, known as compression braking, is often used in engine braking to prevent acceleration or even to slow down with minimal or no brake usage (as when descending a long or steep hill). Note that although "compression braking" and "engine braking" are sometimes used to describe the same thing, "compression braking" here refers to the phenomenon itself while "engine braking" refers to the driver's usage of the phenomenon. Compression braking can be greatly increased by opening the cylinders to the exhaust with a valve on downstroke while in overrun, which is often done on large trucks (see Jake brake). 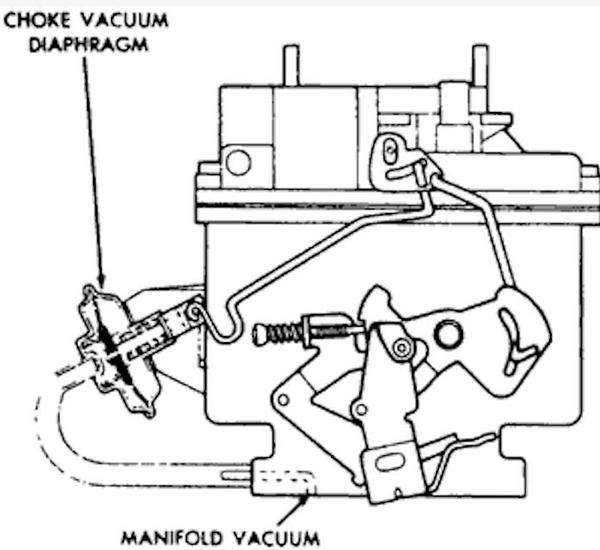 This low (or negative) pressure can be put to uses. A pressure gauge measuring the manifold pressure can be fitted to give the driver an indication of how hard the engine is working and can be used to achieve maximum momentary fuel efficiency by adjusting driving habits: minimizing manifold vacuum increases momentary efficiency. A weak manifold vacuum under closed-throttle conditions shows that the butterfly valve or internal components of the engine (valves or piston rings) are worn, preventing good pumping action by the engine and reducing overall efficiency.

Vacuum is often used to drive auxiliary systems on the vehicle. Vacuum-assist brake servos, for example, use atmospheric pressure pressing against the engine manifold vacuum to increase pressure on the brakes. Since braking is nearly always accompanied by the closing of the throttle and associated high manifold vacuum, this system is simple and almost foolproof. In fact, if the throttle is gradually opened while the brakes are depressed, the driver would feel the back pressure pushing against the brake pedal. Vacuum tanks were installed on trailers to control their integrated braking systems.

Cars built before the 1960s and some AMCs into the 1970s used manifold vacuum to drive windscreen wipers via a small piston and valve arrangement connected to the wiper mechanism. This system was simple and reliable and crucially did not place any extra load on the vehicle's electrical system — cars of the period were fitted with dynamos that would often fail to provide sufficient power for lights, heaters, wipers etc. as well as supplying charge to the battery and power to the ignition system if all were required at once. Powering the wipers by vacuum means that the speed of the wipers inversely corresponds to engine load. Hence under certain conditions (such as when the vehicle was climbing a hill at full throttle), little or no vacuum was generated and the wiper system would either stop all together or slow to the point of being unusable. Air conditioning or ventilation systems also use(d) manifold vacuum to drive the valves controlling air flow and heating.

Another obsolete accessory is the "Autovac" fuel lifter which uses vacuum to raise fuel from the main tank to a small auxiliary tank, from which it flows by gravity to the carburettor. This eliminated the fuel pump which, in early cars, was an unreliable item.

Many diesel engines do not have butterfly valve throttles. The manifold is connected directly to the air intake and the only suction created is that caused by the descending piston with no venturi to increase it, and the engine power is controlled by varying the amount of fuel that is injected into the cylinder by a fuel injection system. This assists in making diesels much more efficient than petrol engines.

If vacuum is required (vehicles that can be fitted with both petrol and diesel engines often have systems requiring it), a butterfly valve connected to the throttle can be fitted to the manifold. This reduces efficiency and is still not as effective as it is not connected to a venturi. Since low-pressure is only created on the overrun (such as when descending hills with a closed throttle), not over a wide range of situations as in a petrol engine, a vacuum tank is fitted.

Most diesel engines now have a separate vacuum pump ("exhauster") fitted to provide vacuum at all times, at all engine speeds.

Many new BMW petrol engines do not use a throttle in normal running, but instead use "Valvetronic" variable-lift intake valves to control the amount of air entering the engine. Like a diesel engine, manifold vacuum is practically non-existent in these engines and a different source must be utilised to power the brake servo.