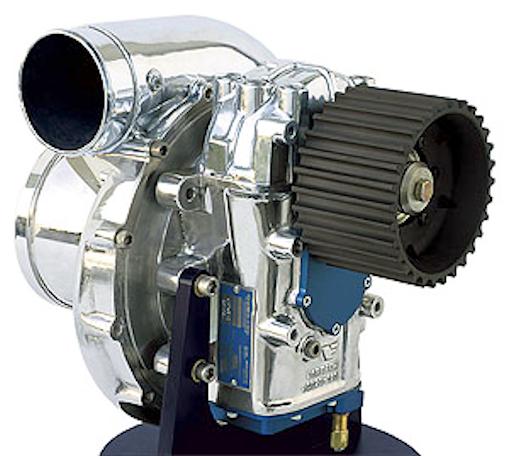 Lately, centrifugal superchargers have become very common in today’s performance automotive world. Superchargers are sometimes installed as original equipment on some vehicles manufactured today. Centrifugal supercharging creates an efficient, compact and intercooler friendly means to boost horsepower in both gasoline and diesel engines for a wide variety of watercraft, land craft and aircraft.

The four main components of a centrifugal supercharger are the volute (compressor housing), diffuser, impeller and transmission. Volutes are typically cast into a form from aluminum rather than other metals due to the combination of strength, weight, and resistance to corrosion. Volutes are then precision machined to match the impeller design Impellers are designed in many configurations, and Euler’s pump and turbine equation plays an important role in understanding impeller performance. Impellers are often formed by casting metals into a form and then machined, with the highest quality impellers machined from solid billet.

The transmission provides a step-up ratio from the input shaft (driven from the engine crankshaft) to the output shaft, to which the impeller attaches (it is not uncommon for centrifugal supercharger impeller speeds to exceed 100,000 rotations per minute). The basic components of the gear drive centrifugal transmission are shafts, gears, bearings, and seals. Because of the high speeds and loads the transmission must endure, components are machined, ground and assembled to extremely close tolerances.

The centrifugal supercharger draws its power from the movement of the drive where it is attached. At this point, the supercharger powers an impeller – or small rotating wheel. The impeller draws air into a small compressor housing (volute) and centrifugal force sends the air into the diffuser. The result is air that is highly pressurized, but that travels at low speed. The high-pressure, low-speed air is then fed into the engine, where the additional pressure gives the engine the ability to burn more fuel and have a higher level of combustion. This results in a faster, more responsive vehicle due to greater engine efficiency. 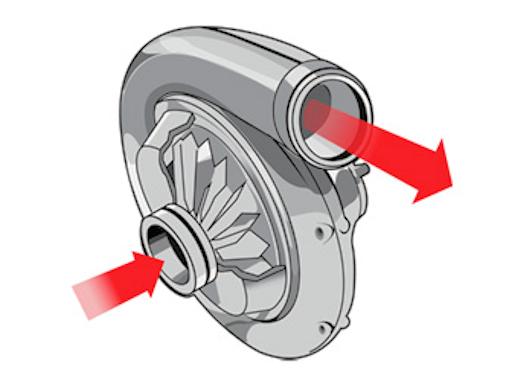 Beyond the use in aircraft which drove many improvements in centrifugal design, more widespread use of the centrifugal supercharger has been heavily focused on the automotive performance aftermarket.

Improvements in design and machining technology has allowed for major advancements in compressor efficiency, as well as bearing and seal design. As a reliable, safe and affordable (dollar per horsepower) option to increase the performance of cars, truck, boats, motorcycles and UTV’s, centrifugal supercharging has become a viable option for performance enthusiasts in a variety of applications. Due to the ease of installation, and the fact that many systems utilize integrated intercooling, centrifugal supercharging continues to gain popularity within the performance industry.

Centrifugal supercharger technology has also found its way into industrial applications. In many industries, pneumatic conveying is now the preferred method for moving product or media within a facility. Traditionally the only source for air flow of this volume was considered to be a Roots style compressor. Due to its efficient design, centrifugal technology is now being embraced because it offers substantial energy savings, lower discharge air temperatures and quieter operation.

Because centrifugal superchargers utilize centrifugal forces to compress the air, they offer higher efficiency than positive displacement designs, both in terms of power consumption and heat production. “Perhaps the simplest of all superchargers, the centrifugal can also be the most thermally efficient”. The compressor-side of turbochargers are centrifugal designs as well, and also feature high efficiency.