A throttle is the mechanism by which the flow of a fluid is managed by constriction or obstruction. An engine's power can be increased or decreased by the restriction of inlet gases (i.e., by the use of a throttle), but usually decreased. The term throttle has come to refer, informally and incorrectly, to any mechanism by which the power or speed of an engine is regulated. What is often termed a throttle (in an aviation context) is more correctly called a thrust lever. For a steam engine, the steam valve that sets the engine speed/power is often known as a regulator.

In a gasoline internal combustion engine, the throttle is a valve that directly regulates the amount of air entering the engine, indirectly controlling the charge (fuel + air) burned on each cycle due to the fuel-injector or carburetor maintaining a relatively constant fuel/air ratio. In a motor vehicle the control used by the driver to regulate power is sometimes called the throttle pedal or accelerator.

The throttle is typically a butterfly valve. In a fuel-injected engine, the throttle valve is placed on the entrance of the intake manifold, or housed in the throttle body. In a carbureted engine, it is found in the carburetor.

When a throttle is wide open, the intake manifold is usually at ambient atmospheric pressure. When the throttle is partially closed, a manifold vacuum develops as the intake drops below ambient pressure.

In a reciprocating-engine aircraft, the throttle control is usually a hand-operated lever or knob. It controls the engine power, which may or may not reflect in a change of RPM, depending on the propeller installation (fixed-pitch or constant speed).

The power output of a diesel engine is controlled by regulating the quantity of fuel that is injected into the cylinder. Because the engines do not need to control air volumes, they lack a butterfly valve in the intake tract. An exception to this generalization is newer diesel engines meeting stricter emissions standards, where a throttle is used to generate intake manifold vacuum, thereby allowing the introduction of exhaust gas (see EGR) to lower combustion temperatures and thereby minimize NOx production.

In fuel injected engines, the throttle body is the part of the air intake system that controls the amount of air flowing into the engine, in response to driver accelerator pedal input in the main. The throttle body is usually located between the air filter box and the intake manifold, and it is usually attached to, or near, the mass airflow sensor.

The largest piece inside the throttle body is the throttle plate, which is a butterfly valve that regulates the airflow.

When the driver presses on the accelerator pedal, the throttle plate rotates within the throttle body, opening the throttle passage to allow more air into the intake manifold. Usually an airflow sensor measures this change and communicates with the ECU. The ECU then increases the amount of fuel being sent to the fuel injectors in order to obtain the desired air-fuel ratio. Often a throttle position sensor (TPS) is connected to the shaft of the throttle plate to provide the ECU with information on whether the throttle is in the idle position, wide-open throttle (WOT) position, or somewhere in between these extremes.

Throttle bodies may also contain valves and adjustments to control the minimum airflow during idle. Even in those units that are not "drive-by-wire", there will often be a small electric motor driven valve, the Idle Air Control Valve (IACV), that the ECU uses to control the amount of air that can bypass the main throttle opening. 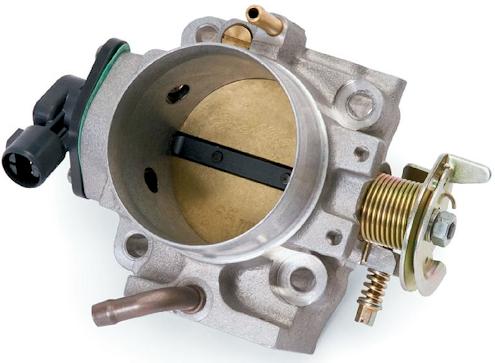