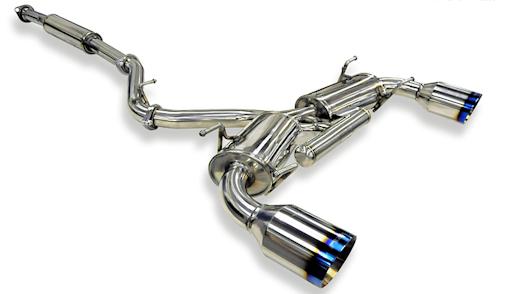 Tuned exhaust systems are common on motor racing engines, light aircraft engines,model engines and two-stroke motorcycle engines, and are not restricted to these applications. They are of two main types:

In either case, the efficiency of the system is greatest at a particular engine speed, which is determined by the exhaust system geometry. Tuning the system for best effect is typically done both by calculation during the design of the exhaust system, and by trial and error during engine development.

An important recent development is variable geometry exhaust systems, both for two-stroke and four-stroke engines, which allow the tuning to be effective over a wider range of engine speeds.

In many two-stroke engines, the exhaust port is opened and closed directly by the position of the piston rather than by a separate valve, which restricts the timing of its operation; Typically, the port remains open long after is optimum, allowing some of the incoming charge to escape. This can be partly addressed by use of a tuned exhaust system to deliver a pulse of positive pressure prior to the port closing, to retain the charge.

Direct-injection two-stroke diesel engines tend to use exhaust valves actuated either by camshafts or electronic control, rather than exhaust ports. This system is called uniflow scavenging. Opposed piston engines are inherently uniflow-scavenged, but these do use piston-controlled cylinder ports. Two-stroke opposed piston engines such as the Napier Deltic and Junkers Jumo 204 engines use one piston to control the inlet port and the other the exhaust, allowing more flexibility in timing. A variation of this approach is taken by the split-single engine, in which two cylinders share one combustion chamber, with the piston in one cylinder controlling the transfer port and the other the exhaust port.

This type of exhaust system can be used with or without a muffler, and so can be used on both race and road vehicles.

A less common tuned exhaust type is the zoomie header, which consists of a simple tuned pipe, one per cylinder.The shock wave is reflected at the open end of the pipe, so no muffler can be fitted. Zoomie headers are used in drag racing, hydroplane racing, truck pulling and similar competitions.They were also used on many aircraft engines of the era of piston-engine planes.

There have been a number of attempts to broaden the speed range at which a tuned exhaust is effective by use of variable geometry.

A variable tuned exhaust system has been used on several motorcycles, including models by Honda, Kawasaki and Suzuki, often in combination with a variable timing exhaust port. Control is either mechanical, operated either automatically according to the engine speed or manually by the rider, or electronic, allowing more precise automatic control.

Variable geometry exhaust systems have been used on some four-stroke motorcycles, such as the 1987 Yamaha FZR1000, and also on some cars.

Pressure wave superchargers, also known as wave rotors, such as the Comprex and Hyprex units, use a synchronised supercharger to utilise the exhaust pulse energy. Ferrari experimented with a wave rotor for Formula One but it never raced, Mazda produced a diesel powered 626 equipped with a wave rotor in 1988, and in 1996 the SmILE concept car incorporated one.