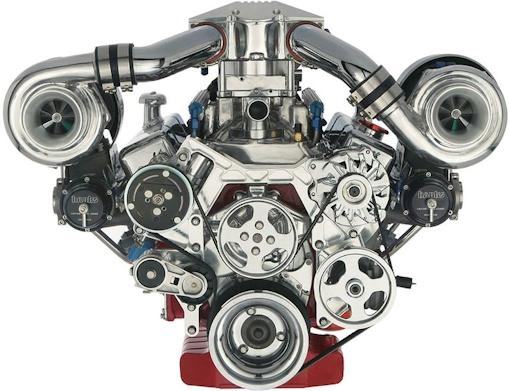 Twin-turbo or biturbo refers to a turbocharged engine, in which two turbochargers compress the intake charge. More specifically called "parallel twin-turbos". Other kinds of turbocharging, include sequential turbocharging and, staged turbocharging. The latter is used in diesel automobile racing applications.

Paralleled twin-turbo refers to a turbocharger configuration in which two identical turbochargers function simultaneously, splitting the turbocharging duties equally. Each turbocharger is driven by half of the engine's spent exhaust energy. In most applications, the compressed air from both turbos is combined in a common intake manifold and sent to the individual cylinders. Usually each turbocharger is mounted to its own individual exhaust/turbo manifold, but on inline-type engines both turbochargers can be mounted to a single turbo manifold. Parallel twin turbos applied to V-shaped engines are usually mounted with one turbo assigned to each cylinder bank, providing packaging symmetry and simplifying plumbing over a single turbo setup. When used on inline engines parallel twin turbos are commonly applied with two smaller turbos, which can provide similar performance with less turbo lag than a single larger turbo. Some examples of parallel twin-turbo inline engines are Nissan's RB26DETT, BMW's N54 and Volvo's B6284T and B6294T. Some examples of V formation engines with parallel twin-turbos include Mitsubishi's 6A12TT and 6G72TT; Nissan's VG30DETT and VR38DETT; and Audi's 1997-2002 S4 (B5), 1997-2005 A6, and 2003-2004 RS6.

While a parallel twin-turbo set-up theoretically has less turbo lag than a single turbocharger set up, this is not always the case due to many factors. Marginally reduced combined inertial resistance,simplified exhaust plumbing, and the simultaneous spooling of both turbos means that there can still be a noticeable bit of lag, especially in high-flow turbo/high boost applications. Some ways to counter this are to use a light pressure set up with smaller turbos, where the turbos are designed to output less boost but spool earlier. While this setup sacrifices some top end power, it still has less lag than a similar engine with a single turbo set up making the same power. Another system would be the use of variable geometry turbochargers. This system changes the angle of the guide vanes depending on the exhaust pressure, giving the system excellent power throughout the rev range. Once used mainly in turbocharged diesel engines, Chrysler was the first to use it in mass-production gasoline-powered vehicles with the Shelby CSX, debuted in 1989. 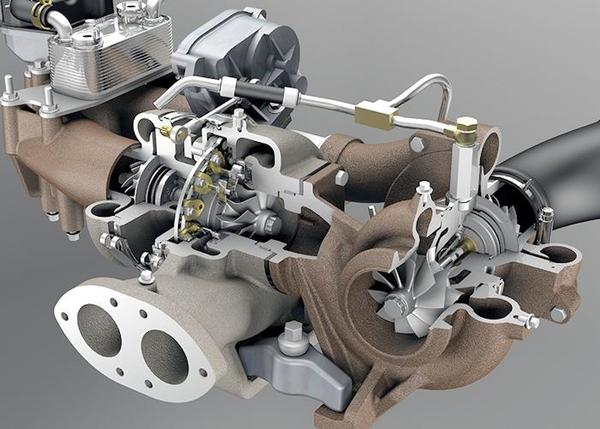 Sequential turbos refer to a set-up in which the motor utilizes one turbocharger for lower engine speeds, and a second or both turbochargers at higher engine speeds. Typically, larger high-flow turbochargers are not as efficient at low rpms, resulting in lower intake manifold pressures under these conditions. On the other hand, smaller turbos spool up quickly at low rpms but cannot supply enough air at higher rpms. During low to mid engine speeds, when available spent exhaust energy is minimal, only one relatively small turbocharger (called the primary turbocharger) is active. During this period, all of the engine's exhaust energy is directed to the primary turbocharger only, providing the small turbo's benefits of a lower boost threshold, minimal turbo lag, and increased power output at low engine speeds. As rpm increases, the secondary turbocharger is partially activated in order to pre-spool prior to its full utilization. Once a preset engine speed or boost pressure is attained, valves controlling compressor and turbine flow through the secondary turbocharger are opened completely. (The primary turbocharger is deactivated at this point in some applications.) In this way a full twin-turbocharger setup provides the benefits associated with a large turbo, including maximum power output, without the disadvantage of increased turbo lag.

Sequential turbocharger systems provide a way to decrease turbo lag without compromising ultimate boost output and engine power. Perhaps the most noteworthy application of this system is the fourth-generation Toyota Supra (1993-1998), which is generally regarded as having the most reliable sequential turbo system yet fitted to a production automobile, with a reported failure rate of less than 1% as of 2011. Other examples of cars with a sequential twin-turbo setup include the 1986-1988 Porsche 959, the 1990-1995 Eunos Cosmo JC, 1992-2002 Mazda RX-7 FD3S Turbo (13B-REW engine), the 1994-2005 JDM Subaru Legacy GT, GT-B & B4 RSK (EJ20TT engine), and the 2008-2010 Ford Super Duty (6.4L Power Stroke diesel engine).

A sequential turbo can also refer to a system where the output pressure must be greater than can be provided by a single turbo, commonly called a staged twin turbo system. In this case, multiple similarly sized turbochargers are used in sequence, but both operate constantly. The first turbo boosts pressure as much as possible (for example to three times the intake pressure). Subsequent turbos take the charge from the previous stage and compresses it further (for example to an additional three times intake pressure, for a total boost of nine times atmospheric pressure). This configuration is commonly found on piston engine aircraft which usually do not need to rapidly raise and lower engine speed (and thus where turbo lag is not a primary design consideration), and where the intake pressure is quite low due to low atmospheric pressure at altitude, requiring a very high pressure ratio. High-performance diesel engines also sometimes use this configuration, since diesel engines do not suffer from pre-ignition issues and can use significantly higher boost pressure than Otto cycle engines.