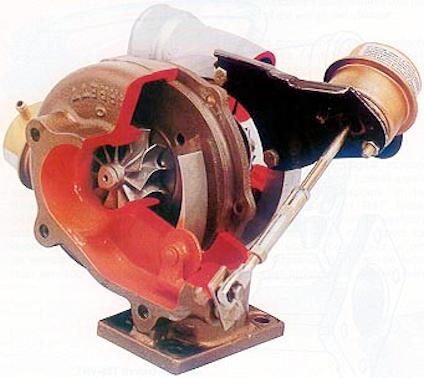 Variable-geometry turbochargers (VGTs) are a family of turbochargers, usually designed to allow the effective aspect ratio (A:R) of the turbo to be altered as conditions change. This is done because optimum aspect ratio at low engine speeds is very different from that at high engine speeds. If the aspect ratio is too large, the turbo will fail to create boost at low speeds; if the aspect ratio is too small, the turbo will choke the engine at high speeds, leading to high exhaust manifold pressures, high pumping losses, and ultimately lower power output. By altering the geometry of the turbine housing as the engine accelerates, the turbo's aspect ratio can be maintained at its optimum. Because of this, VGTs have a minimal amount of lag, have a low boost threshold, and are very efficient at higher engine speeds. VGTs do not require a wastegate. VGTs tend to be much more common on diesel engines as the lower exhaust temperatures mean they are less prone to failure. The few early gasoline-engine VGTs required significant pre-charge cooling to extend the turbocharger life to reasonable levels, but advances in material technology has improved their resistance to the high temperatures of gasoline engine exhaust and they have started to appear increasingly in, e.g., gasoline-engined sports cars.

The two most common implementations include a ring of aerodynamically-shaped vanes in the turbine housing at the turbine inlet. In general, for light-duty engines (passenger cars, race cars, and light commercial vehicles), the vanes rotate in unison to vary the gas swirl angle and the cross sectional area. In general, for heavy-duty engines, the vanes do not rotate, but instead the axial width of the inlet is selectively blocked by an axially sliding wall (either the vanes are selectively covered by a moving slotted shroud or the vanes selectively move vs a stationary slotted shroud). Either way, the area between the tips of the vanes changes, leading to a variable aspect ratio.

In trucks, VG turbochargers are also used to control the ratio of exhaust recirculated back to the engine inlet (they can be controlled to selectively increase the exhaust manifold pressure exceeds the inlet manifold pressure, which promotes exhaust gas recirculation (EGR). Although excessive engine backpressure is detrimental to overall fuel efficiency, ensuring a sufficient EGR rate even during transient events (e.g., gear changes) can be sufficient to reduce nitrogen oxide emissions down to that required by emissions legislation (e.g., Euro 5 for Europe and EPA 10 for the USA).

Another use for the sliding vane type of turbocharger is as downstream engine exhaust brake (non-decompression-type), so that an extra exhaust throttle valve is not needed (turbo brake). Also, the mechanism can be deliberately modified to reduce the turbine efficiency in a predefined position. This mode can be selected to sustain a raised exhaust temperature to promote "light-off" and "regeneration" of a diesel particulate filter (this involves heating the carbon particles stuck in the filter until they oxidize away in a semi-self-sustaining reaction - rather like the self-cleaning process some ovens offer). Actuation of a VG turbocharger for EGR flow control or to implement braking or regeneration modes in general requires hydraulic or electric servo actuation.

History and examples of use

One of the first production cars to use these turbos was the limited-production 1989 Shelby CSX-VNT, equipped with a 2.2-Liter Chrysler K engine . The Shelby CSX-VNT utilised a turbo from Garrett, called the VNT-25 because it used the same compressor and shaft as the more common Garrett T-25. This type of turbine is called a Variable-Nozzle Turbine (VNT). Turbocharger manufacturer Aerocharger uses the term 'Variable-Area Turbine Nozzle' (VATN) to describe this type of turbine nozzle. Other common terms include Variable-Turbine Geometry (VTG), Variable-Geometry Turbo (VGT) and Variable-Vane Turbine (VVT). In Japan, the 1989 Honda Legend used a variable geometry turbo with an integrated water cooled intercooler installed on its 2.0 L V6 engine, and was only manufactured for one year.

The 2007 Porsche 911 Turbo has twin VNT turbochargers on its 3.6-liter horizontally-opposed six cylinder gasoline engine. VGTs have been used on advanced turbo diesel engines for many years, primarily to compensate for performance loss when the engine is equipped with an EGR.

In 2012, Suprock Technologies, LLC released a VGT turbocharger controller that is capable of actuating any variable geometry turbocharger based on sensor parameters including pressures, temperatures, and shaft speed. This controller enables vehicles that aren't originally equipped with a VGT to make use of the technology for increased performance and efficiency. The controller is capable of calculating compressor efficiency among other parameters that are displayed on a gauge pod located in the cabin. Due to the number of inputs, the device can be used to tune and diagnose turbo systems based on temperatures, pressures, air flow, and compressor behavior.

In 2013, the Suprock Technologies VGT controller was implemented by Blaylock Turbo on their Switchblade VGT. Such implementations of VGT technology have potential to reduce cruise back pressure, lower exhaust gas temperature (EGT), and increase fuel economy on vehicles that have previously had standard turbochargers.