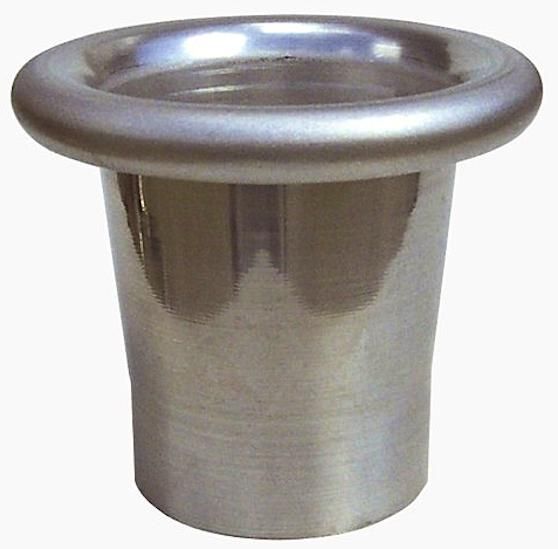 A velocity stack is a trumpet-shaped device of differing lengths which is fitted to the air entry of an engine's intake system, carburetor or fuel injection. It is designed to:

Modern engines universally have tuned intake tract volumes and associated resonance frequencies, designed to provide higher than atmospheric intake air pressure while the intake valves are open - increasing the density of the trapped air in the combustion chamber (higher compression). Modified engines often have the original air box and associated ducting removed and velocity stacks are installed as accessories.

In amateur and professional racing, aftermarket velocity stacks are often used, as rules allow, and gains in the order of 2% to 4% can be obtained when inlet radii and stack lengths are optimized for that engine.

OEM automotive manufacturers have many regulations to adhere to. One of these is noise. A properly tuned intake tract produces a rather audible intake noise under high airflow conditions - that is commonly "untuned" to allow the vehicle to pass EPA and DOT noise regulations.

The length of the stack is known to have a direct effect on a particular engine's boosted power range.

The acceleration of air flow into a duct is inherently a highly efficient process and the difference between even the crudest radius inlet, and the most aerodynamic shape possible is slight, amounting to no more than a few percent. The flow coefficient of a perfect entry would be 1.0 while the coefficient for a sharp edged entry would be 0.6 and a re-entrant plain pipe 0.5. In practice these latter types of entry are never used for engine intakes. There is always some attempt to provide some radius at the entry. This means that total engine airflow would not increase by the amount suggested by these figures, which apply only to the entry alone, as the inlet end is never the smallest or most restrictive part of the system. Because the greatest losses to flow occur near the valve seat, actual overall gain from any improvement of the entry flow would be much less.

In the real world, on high-rpm IR IC engine, using a minimum amount of inlet radius gives the best wave strength and a power boost of 2% to 4% over a 3000 to 3500 rpm range. Using a larger radius, like 3/4", broadens out the resonant pressure wave rpm range, but the compression boosting pressure wave is greatly diminished and almost unnoticed by the engine. 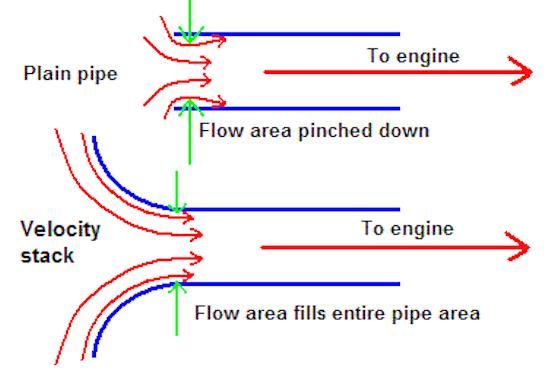