The Lamborghini V10 is a ninety degree (90°) V10 petrol engine which was developed for the Lamborghini Gallardo automobile, first sold in 2003.

Developed by Lamborghini, for use in the Gallardo, and the first engine developed for Automobili Lamborghini S.p.A. after they were acquired by AUDI AG - part of the Volkswagen Group.

This engine has its origins in two concept cars made by Lamborghini, the 1988 P140 and the 1995 Calà. Both were equipped with a 3.9 liter, in the early 2000s Lamborghini resume the project and redesigned it by increasing its displacement.

Its crankcase and cylinder block is built at the Audi Hungaria Motor Kft. factory in Győr, Hungary, whilst final assembly is at Sant'Agata, Italy.It has a 90° vee angle and unusually for a production motor a dry sumplubrication system was chosen to keep the center of gravity of the engine low.

There was also some speculation that the engine block of the original 5.0-litre Lamborghini V10 is closely based on the Audi 4.2 FSI V8, which Audi produces for their luxury cars. However, this was denied by AUDI AG, in their official documentation for their 5.2 FSI V10 engine, as used in the Audi S6 and Audi S8 - the Lamborghini 5.0 V10 has a cylinder bore spacing of 88 millimetres (3.46 in) between centres, whereas the Audi 5.2 V10 cylinder bore spacing is 90 millimetres (3.54 in). The cylinder heads use the four valves per cylinder layout favoured by the Italian firm, rather than the five valve per cylinder variation formerly favoured by the German members of Volkswagen Group - including Audi and Volkswagen Passenger Cars. It was later confirmed by Stefan Reil of Audi's quattro GmbH subsidiary that the new 5.2-litre Lamborghini V10 does share technologies with the Audi 5.2 V10 engine, as is evident by Lamborghini's usage of Audi's Fuel Stratified Injection, and 90 mm cylinder spacing. 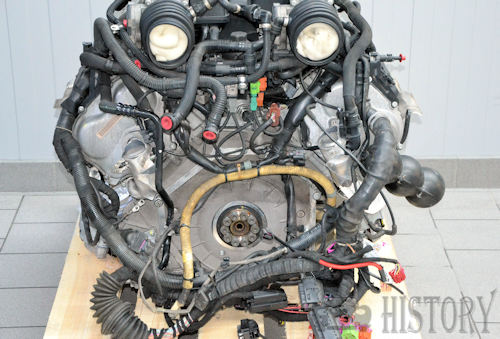 (The Lamborghini V10 has also had a placement in the Audi R8, RS6, S8 and S6. The 5.2 V10 used in the S6 and S8 is different in several important aspects, namely a less robust crankshaft with a split pin design, cast aluminum pistons, and a traditional wet-sump oiling system, as well as differences in the valvetrain - all of which, combined, result in the much higher RPM red line and specific power output of the Gallardo and R8) 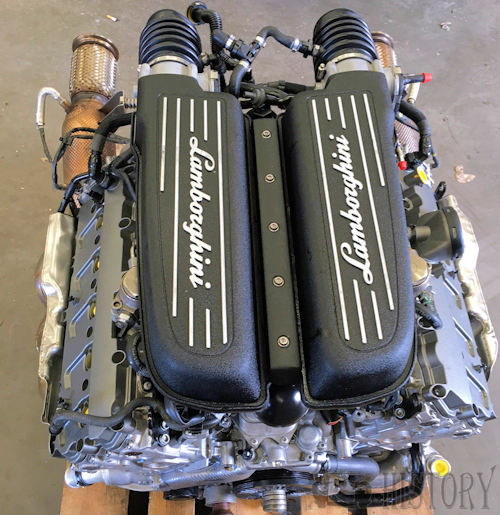