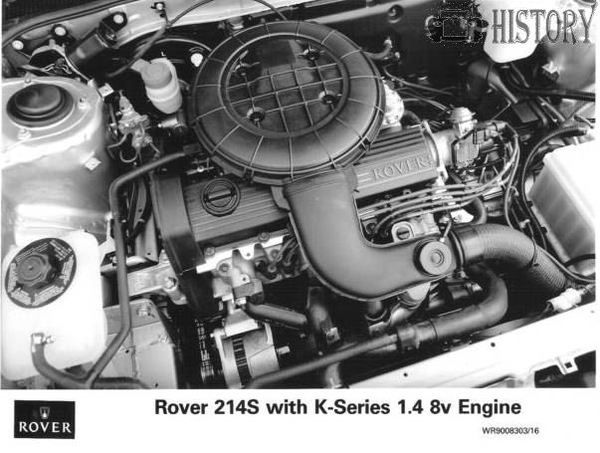 The K-Series engine is a series of engines built by Powertrain Ltd, a sister company of MG Rover. The engine was built in two forms: a straight-four cylinder, available with SOHC and DOHC, ranging from 1.1 L to 1.8 L; and the KV6 V6 variation.

The K-Series was introduced in 1988 by Rover Group as a powerplant for the Rover 200 car. It was revolutionary in that it was the first volume production implementation of the low pressure sand casting technique. This works by injecting liquid aluminium into an upturned sand mould from below. In this way any oxide film always remains on the surface of the casting and is not stirred into the casting structure. This production technology overcame many of the inherent problems of casting aluminium components and consequently permitted lower casting wall thickness and higher strength to weight ratios. However, the process required the use of heat treated LM25 material which gave the engines a reputation for being fragile. An engine overheat would often result in the material becoming annealed and rendering the components scrap. The aluminium engine blocks were fitted with spun cast iron cylinder liners that were initially manufactured by GKN's Sheepbridge Stokes of Chesterfield, but replaced by spun cast iron liners made by Goetze after some seminal research conducted by Charles Bernstein at Longbridge, which proved influential even to Ducati for their race engines. Unfortunately a large number of aftermarket engines, the so-called "VHPD"s" were built with the old substandard GKNs by Minister, Lotus and PTP well after the Goetze liner's introduction to the production line in 2000.

The engine was introduced initially in 1.1 L single overhead cam and 1.4 L dual overhead cam versions. The engines were held together as a sandwich of components by long through-bolts which held the engine under compression, though this construction is not unknown in early lightweight fighter engines from the First World War. It had also been used in motorcycle engines and Triumph Car's "Sabrina" race engine. As Honda stopped providing Rover with engines after the end of their relationship, but well before the BMW takeover, an enlargement of the K Series design to 1.6 and 1.8 litres was carried out. This was done by using larger diameter cylinder liners and also increasing the stroke. The change required a block redesign with the removal of the cylinder block's top deck and a change from "wet" liners to "damp" liners.[1] The plastic throttle body fitted to the engine until 2001 was manufactured by the SU Carburettor company - they also included aluminium and larger sized bodies.

The two types of head that were bolted to the common four-cylinder block were designated K8 (8 valves) and K16 (16 valves). A later head design also incorporated a Rover-designed Variable Valve Control (VVC) unit (derived from an expired AP patent). This allowed more power to be developed without compromising low-speed torque and flexibility. The VVC system constantly alters the inlet cam period, resulting in a remarkably flexible drive - the torque curve of a VVC K-series engine is virtually flat throughout the rev range and power climbs steadily with no fall-off whatsoever until the rev limiter kicks in at 7,200 rpm.

By comparison, the V6 engines are more conventional engines that do not make use of the through bolts to hold the head to the block.

Early K8 engines used a single SU KIF carburetter with a manual choke and a breaker-less distributor mounted on the end of the camshaft. MEMS Single point injection became standard with the launch of the Rover 100 in 1994.

K16 models used MEMS electronic engine management in either Single Point or Multi Point forms, with a single coil on the back of the engine block and a distributor cap and rotor arm on the end of the inlet camshaft. MEMS 2J was used on the VVC engine, to control the Variable Valve Control and also the distributorless ignition system, which was necessary thanks to having camshaft drive belts at both ends of the engine. With the launch of the Rover 25 and Rover 45 in 1999, MEMS 3 was introduced, with twin coils and sequential injection.

The K16 82 hp variant is exactly the same as the 103 hp (77 kW) version, apart from a restrictive throttle body designed to lower the car's insurance group; the 90 hp (67 kW) Spi features single-point fuel injection rather than the multi-point of the later engine.