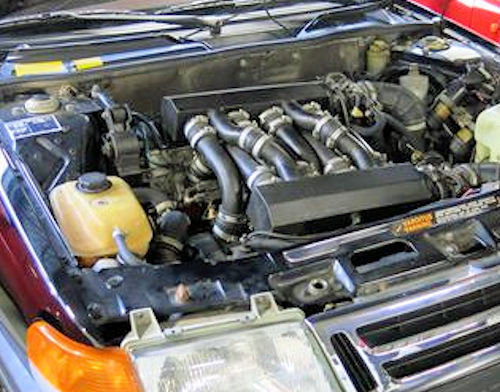 The Saab V8 was a V8 4-liter engine developed for Saab Automobile by Valmet in Linnavuori factory, Finland . Only five prototypes were made. General Motors became a partner in Saab Automobile and instead wanted Saab to use their new V6, which resulted in the scrapping of the project.

The engine had four camshafts and 32 valves and, in the non-turbocharged form, it produced 250 to 300 hp depending on the version. Maximum torque was around 300–320 Nm.The block was cast by Valmet Rautpohja plant in Jyväskylä. Crankshafts came from England and cylinder heads came from the Saab B202 engine. Another head had intake and exhaust ports reversed.

The engine was fitted to a Saab 9000 without any body modifications. One engine in the car can be found in the factory museum at Linnavuori, and two engines are in Saab museum in Uusikaupunki: one installed in a Saab 9000 and another in stand.

This was not the first time Saab was interested in V8s. Saab also considered using the Triumph V8 in the Saab 99 as they already used the related Triumph Slant-4 engine. Only a few were built and Saab instead used turbocharging. Saab also fitted a GM V8 into a Saab 9-5 as they felt a V8 might be necessary for the US market.