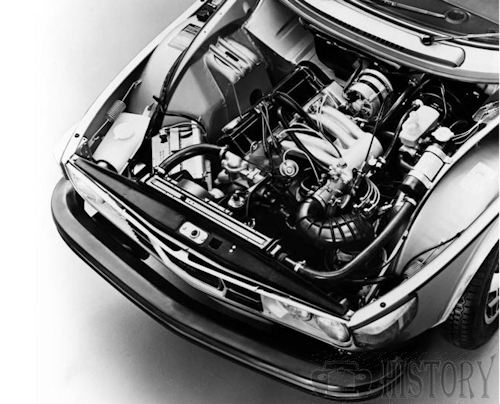 The Saab B engine is based on the Triumph Slant-4 engine and replaced their aging two-stroke engine. When it was decided to develop a new Saab model in 1964, the Saab 99, the decision was also made to give it a modern four-stroke engine. A contract was signed with Triumph to deliver their soon to be complete 1.5 liter engine to use in the Saab 99. The engine was enlarged to 1.75 liters before delivery started, and later enlarged again to 1.85 liters. In 1972 Saab began domestic production of the engine, because of reliability problems with the Triumph-made units, effectively creating the Saab B engine.

This engine shared much with the original Triumph design, including bore centers and bearings, but was substantially redesigned. The redesign kept the unusual waterpump arrangement, which consisted of a cast aperture in the block, and the pump shaft with bearing, seals and impeller pressed into the aperture. The pump is driven by a jackshaft and helical gear. Later B engines used a fine tooth gear which is easily damaged and is a weak link in an otherwise very reliable engine.

In 1977, Saab added a turbocharger, creating one of the earliest turbocharged engines in volume production. This was placed in the Saab 99 and early 900 Turbo models.

In late 1970s Saab-Valmet also developed a dual-fuel version which was able to use kerosene or turpentine alongside gasoline. Low compression ratio for 67 octane kerosene was achieved by using turbo engine pistons. The engine had an electronic ignition also used in the turbo engine. Switch between gasoline and kerosene was automatic but the driver was able to force gasoline-only mode with a manual switch. Burning kerosene the engine produced 85 hp at 5600 rpm and was available only in Finland with 99 GL.

In 1981, Saab began lightening and redesigning the engine, creating the Saab H engine.