The Saab H engine is a redesign of the Saab B engine, which in turn was based on the Triumph Slant-4 engine.

All versions feature a grey cast iron block and an aluminum head with a single or double overhead chain driven camshafts. SOHC engines use two valves per cylinder and DOHC versions use four valves per cylinder with a pentroof chamber, the valve angle being 22 degrees from vertical. All engines use flat inverted bucket type valve lifters, hydraulic in the case of DOHC engines.

The engines were given numbers, for instance B201 is a 2.0 litre (20) engine with one camshaft.

B201 is the original H engine with two valves per cylinder and a single overhead camshaft. It was introduced in 1981 and unlike the B engine it did not have the central shaft which used to power the distributor, oil- and coolant pump. Instead the distributor is located at the front of the cylinder head and directly driven by the camshaft, while the integrated waterpump was replaced with a separate unit to the rear of the engine.

Valmet Automotive in Uusikaupunki also planned a downsized 1.6 liter version of B201, to better suit Finnish vehicle tax laws. Downsizing was made by using a narrower cylinder bore. The prototype engine produced 92 PS (68 kW; 91 hp) at 5400 rpm, fitted with Bosch K-jetronic fuel injection. One such prototype engine is displayed in the Uusikaupunki Saab-museum.

In 1984, Saab added a 16 valve cylinder head with double overhead camshafts. They retroactively renamed the 8-valve version the B201 and used B202 as the name of the new multi-valve unit. Another notable addition to the B202 was hydraulic valve lifters and Ecopower ("ep" in Italy, "(900)S" elsewhere), with a pre-heated catalytic converter for reduced emissions.

In 1991, Saab introduced a 140 bhp 2.1 litre naturally aspirated 16 valveversion of this engine, with an increased displacement of (129.3 cu in (2,119 cc)) and a resulting name of B212. The inlet manifold was enlarged and redesigned for better and greater flow. The intake manifold and the head from the 2.1 liter constitute a well-known replacement for 1985-1993 16 valve, 2.0 liter turbocharged Saabs. Power increase is modest at stock boost but becomes much more evident at higher boost levels.

Engine builder John Nicholson also developed a Formula Three engine from the B202, for use in a Reynard 853chassis. This version one of the first to use Saab's direct ignition system (SDI) and produced 165 PS (121 kW) at 5600 rpm. Its other strength was high power in an unusually broad powerband for a naturally aspirated racing engine.

A major redesign of the H engine came in 1990 in the form of the new B234 for the Saab 9000. The B234 featured an increase in stroke from 78 mm (3.1 in) to 90 mm (3.5 in), increasing the displacement to 2.3 liters. With this increased stroke also came a new engine block with increased deck height to make sufficient room for the increased stroke length without being forced to use shorter connecting rods, and in-block counter-rotating balance shafts for reduced vibration (NVH). There are two generations of B234 engine, one made from 1990-1993, the other from 1994 to 1998. The later motors had a revised oil sump system, head, timing cover, and different bell housing pattern. Unlike the previous B202, the block was no longer angled, but straight, something that made it unsuitable for the 900 model with its gearbox under the engine, built into the engine oil sump. The longer stroke B234 was last produced in 1998, that being the last year for the 9000 model. The B234 was selected as one of Ward's 10 Best Engines for 1995 and 1996.

The B204 and B234 are regarded by engine tuners as the preferable engine for performance tuning over the later B205 and B235 engines as the internals are of a higher strength. The later models had lightened internal components to improve efficiency and fuel economy but limit the total power output when the engine's software is revised to increase the boost pressures and specific power output. The B204 engine became a very popular engine swap for Vauxhall and Opel Astra, Calibra, Cavalier and Vectras with the GM T-body platform, in Scandinavia in the mid 2000s - the engine uses the same mounting positions due to sharing the same platform.

The B206 is a version of B204 but without the double balance shafts. It was only offered as a naturally aspirated engine B206I producing 133 hp (99 kW), seemingly a Europe-only option in 1994 non turbo 900 NGs. This engine is popular among Saab tuners in Sweden (e.g. Trollspeed) due to the lack of balance shafts but with presumably equal strength as the turbo blocks with balance shafts.

The B205 and B235 engines are an evolution of the B204 and B234 engines. They were introduced in the 1998 Saab 9-5 giving reduced fuel consumption and emissions with improved refinement. The changes included lightweight internal components (lighter valves, softer valve springs, longer conrods with lighter pistons, and balance shafts), lighter block and cover, heavier flywheel and more. Another development was the introduction of the Trionic 7 torque demand type engine management system. Trionic 7 equipped engines have the black direct ignition casing on top of the engine rather than the red of the Trionic 5.

BAIC offers the Saab H engine in three configurations on several of it's model. The B205R and B235R, 2.0 and 2.3 litre turbo engines are available similar to those used in Saabs. Further BAIC offers a smaller 1.8 litre displacement version named B185R. This version was developed to meet requirement for government vehicle with maximum displacement of 1.8 litres. BAIC continued the development of the Saab H engine. In 2016 the B236R was unveiled. This engine design incorporates variable valve timing and an EGR system which allows the engine to comply with Euro 6 emission standards.

Successor to the Saab H-Engine

The H-engine ended production with the 1st Generation Saab 9-5 in 2009 when the intellectual property was transferred to BAIC. Starting in 2003 with the 9-3Sport Sedan, Saab began utilizing the L850 engine Ecotec. Beginning in 2010 with the 2nd generation 9-5, all Saabs utilized the Ecotec. There were some technologies carried over into the Ecotec line from the Saab H-engine, but for the most part there is very little similarity between the two engine families. Saab continued to use its Trionic engine management system with the Ecotec. 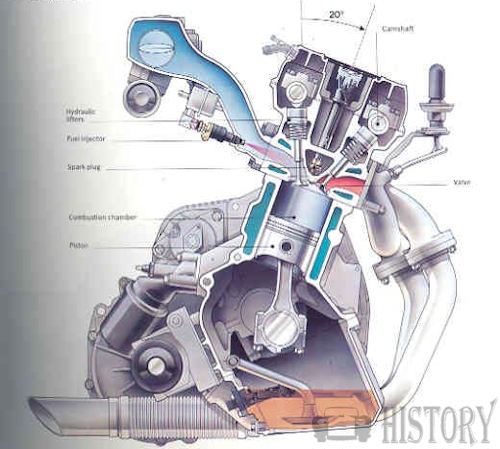