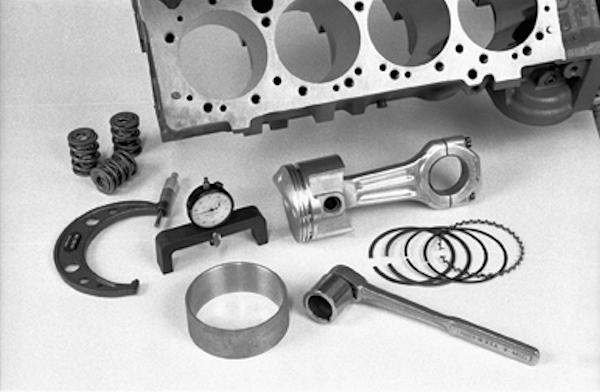 Engine blueprinting means specifically to create an engine that reflects the design intent through the removal of manufacturing tolerances insofar as that is possible such that the engine literally reflects the actual blueprint created by the original engineers who designed the engine. While many people confuse blueprinting with high-performance engine building or tuning, these are in fact different goals.

Because few have the capability to actually blueprint, and because of the monetary incentive of claiming one has performed the work, many people have come to believe blueprinting only means that all the specifications are double-checked. Serious efforts at blueprinting result in better-than-factory tolerances, possibly with custom specifications appropriate for the application. Common goals include engine re-manufacturing to achieve the rated power for its manufacturer's design (because not all mass-production engines put out the rated power), and to rebuild the engine to make more power from a given design than otherwise intended (because custom engines can often be redesigned to different specifications). Blueprinted components allow for a more exact balancing of reciprocating parts and rotating assemblies so that less power is lost through excessive engine vibrations and other mechanical inefficiencies.

Ideally, blueprinting is performed on components removed from the production line before normal balancing and finishing. If finished components are blueprinted, there is the risk that the further removal of material will weaken the component. While it has nothing to do with blueprinting per-Se, lightening components is generally an advantage provided balance and adequate strength are both maintained, and more precise machining will in general strengthen a part by removing stress points, so in many cases performance tuners are able to work with finished components.

For example, an engine manufacturer may list a piston ring end-gap specification of 0.003 to 0.005 inches for general use in a consumer automobile application. For an endurance racing engine which runs hot, a "blueprinted" specification of 0.0045" to 0.0050" may be desired. For a drag-racing engine which runs only in short bursts, a tighter 0.0035 to 0.0040 inch tolerance may be used instead. Thus "blueprint" can mean tighter or looser clearances, depending on the goal.