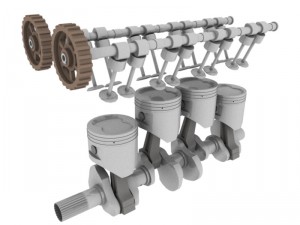 The first DOHC car was the 1912 Peugeot which won the French Grand Prix at Dieppe that year. This car was powered by a straight-4 engine designed by Ernest Henry under the guidance of the technically knowledgeable racing drivers Paul Zuccarelli and Georges Boillot. Boillot, who drove the winning car that year, won the French Grand Prix for Peugeot again in 1913 but was beaten in 1914 by the SOHC Mercedes of Christian Lautenschlager.

Among the early pioneers of DOHC were Isotta Fraschini's Giustino Cattaneo, Austro-Daimler's Ferdinand Porsche, Stephen Tomczak (in the Prinz Heinrich), and W. O. Bentley (in 1919); Sunbeam built small numbers of racing models between 1921 and 1923 and introduced one of the world's first production twin cams in 1924 — the Sunbeam 3 litre Super Sports, an example of which came second at Le Mans in 1925.The first DOHC engines were either two- or four-valve per cylinder racing car designs from companies like Fiat (1912), Peugeot Grand Prix (1912, four-valve), Alfa Romeo Grand Prix (1914, four-valve) and 6C (1928), Maserati Tipo 26 (1926), Bugatti Type 51 (1931).

When DOHC technology was introduced in mainstream vehicles, it was common for it to be heavily advertised. While used at first in limited production and sports cars such as the 1925 Sunbeam 3 litre, Alfa Romeo is one of the twin cam's greatest proponents. 6C Sport, the first Alfa Romeo road car using a DOHC engine, was introduced in 1928. Ever since this, DOHC has been a trademark of most Alfa Romeo engines (some Alfa V6 engines are SOHC, not DOHC. Most Alfasud boxer engines were also SOHC).

Fiat was one of the first car companies to use belt-driven DOHC engines in some of their products in the mid-1960s.Jaguar's XK6 DOHC engine was displayed in the Jaguar XK120 at the London Motor Show in 1948, and used across the entire Jaguar range through the late 1940s, 1950 and 1960s. By the late 1970s, Toyota was the best seller of DOHC engines.

Overhead camshaft commonly abbreviated to OHC,is a valvetrain configuration which places the camshaft of an internal combustion engine of the reciprocating type within the cylinder heads ('above' the pistons and combustion chambers) and drives the valves or lifters in a more direct manner compared to overhead valves (OHV) and pushrods.

Compared to OHV pushrod systems with the same number of valves, the reciprocating components of the OHC system are fewer and have a lower overall mass. Though the system that drives the camshafts may be more complex, most engine manufacturers accept that added complexity as a trade-off for better engine performance and greater design flexibility. The fundamental reason for the OHC valvetrain is that it offers an increase in the engines' ability to exchange induction and exhaust gasses. (This exchange is sometimes known as 'engine breathing' ) Another performance advantage is gained as a result of the better optimised port configurations made possible with overhead camshaft designs. With no intrusive pushrods, the overhead camshaft cylinder head design can use straighter portsof more advantageous crossection and length. The OHC design allows for higher engine speeds, which in turn will increase power output for a given torque.

The OHC valvetrain system may be driven using the same methods as an OHV system, but in practice (and depending on the application), lighter weight and maintenance-free methods are more commonly used. These include using a rubber/kevlar toothed timing belt, duplex or single row roller chains,or in less common cases, gears. Early Ducati motorcycle engines used shafts with bevel gears to drive the camshafts in their OHC engines

Single overhead camshaft (SOHC) is a design in which one camshaft is placed within the cylinder head. In an inline engine, this means there is one camshaft in the head, whilst in an engine with more than one cylinder head, such as a V engine or a horizontally-opposed engine (boxer; flat engine) — there are two camshafts: one per cylinder bank.

In the SOHC design, the camshaft operates the valves directly, traditionally via a bucket tappet; or via an intermediary rocker arm. SOHC cylinder heads are generally less expensive to manufacture than DOHC cylinder heads. Timing belt replacement can be easier since there are fewer camshaft drive sprockets that need to be aligned during the replacement procedure.

In the early era of the liquid-cooled aircraft engine field, single overhead camshaft format engines were in existence during the First World War, for both the Allies and the Central Powers. The Hispano-Suiza 8 — a V8 engine, designed by Marc Birkigt in the Allied camp, and the series of Mercedes inline-six aviation engines, culminating in the Mercedes D.III for the German Empire, both used rotary shaft-driven single overhead camshaft valvetrain systems, and were among the most prominent aviation powerplants of the First World War era. The late-war Liberty L-12 — a V12 engine configuration American aviation engine also used the general Mercedes D-series single overhead camshaft design, based primarily on the later D.IIIa's drive system from rocker box to valvestem.

SOHC designs offer reduced complexity compared to overhead valve designs — when used for multivalve cylinder heads, in which each cylinder has more than two valves. An example of an SOHC design using shim and bucket valve adjustment was the engine installed in the Hillman Imp (four cylinder, eight valve); a small, early 1960s two-door saloon car (sedan) with a rear mounted aluminium-alloy engine based on the Coventry Climax FWMA race engines. Exhaust and inlet manifolds were both on the same side of the engine block (thus not a crossflow cylinder head design). This did, however, offer excellent access to the spark plugs.

In the early 1980s, Toyota and Volkswagen Group also used a directly actuated, SOHC parallel valve configuration with two valves for each cylinder. The Toyota system used hydraulic tappets, while the Volkswagen system used bucket tappets with shims for valve clearance adjustment. Of all valvetrain systems, this is the least complex configuration possible.

A double overhead camshaft (DOHC) valvetrain layout (also known as 'dual overhead camshaft') is characterised by two camshafts located within the cylinder head,one operating the intake valves and one operating the exhaust valves. This design reduces valvetrain inertia more than a SOHC engine, since the rocker arms are reduced in size or eliminated. A DOHC design permits a wider angle between intake and exhaust valves than SOHC engines. This can allow for a less restricted airflow at higher engine speeds. DOHC with a multivalve design also allows for the optimum placement of the spark plug, which in turn, improves combustion efficiency.Engines which have more than one bank of cylinders (i.e. V6, V8 — where two cylinder banks meet to form a 'V') with two camshafts in total remain SOHC; unless each cylinder bank has two camshafts — these latter are DOHC, and are often known as 'quad cam'. The term 'twin cam' is imprecise, but will normally refer to a DOHC engine. Some manufacturers use a SOHC in a multivalve design. Also, not all DOHC engines are multivalve engines. DOHC cylinder heads existed before multivalve cylinder heads appeared in the 1980s. Today, however, DOHC is sometimes confused with multivalve heads, since almost all modern DOHC engines have between three and five valves per cylinder — but 'multivalve' and 'DOHC' are distinct features. 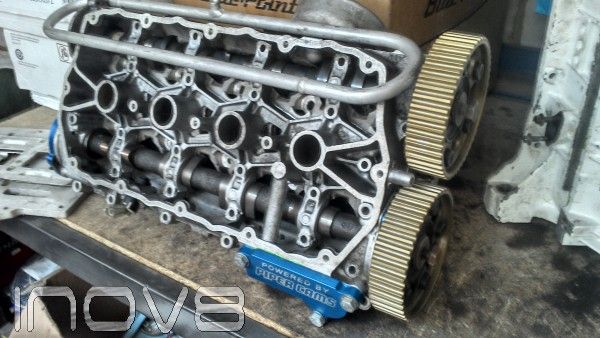