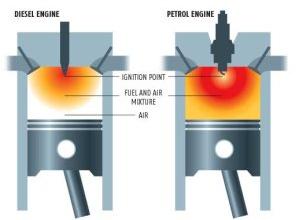 A combustion chamber is the part of an engine in which fuel is burned.

This increase in pressure or volume can be used to do work, for example, to move a piston on a crankshaft or a turbine disc in a gas turbine. If the gas velocity changes, thrust is produced, such as in the nozzle of a rocket engine.

A reciprocating engine is often designed so that the moving pistons are flush with the top of the cylinder block at top dead centre. The combustion chamber is recessed in the cylinder head and commonly contains a single intake valve and a single exhaust valve. Some engines use a dished piston and in this case the combustion chamber can be considered as partly within the cylinder. Various shapes of combustion chamber have been used, such as L-head (or flathead) for side-valve engines;"bathtub", "hemispherical" and "wedge" for overhead valve engines; and "pent-roof" for engines having 3, 4 or 5 valves per cylinder. The shape of the chamber has a marked effect on power output, efficiency and emissions; the designer's objectives are to burn all of the mixture as completely as possible while avoiding excessive temperatures (which create NOx). This is best achieved with a compact rather than elongated chamber. The intake valve/port is usually placed to give the mixture a pronounced "swirl" (the term is preferred to turbulence which implies movement without overall pattern) above the rising piston, improving mixing and combustion. The shape of the piston top also affects the amount of swirl. Finally, the spark plug must be situated in a position from which the flame front can reach all parts of the chamber at the desired point, usually around 15 degrees after top dead centre. It is strongly desirable to avoid narrow crevices where stagnant "end gas" can become trapped, as this tends to detonate violently after the main charge, adding little useful work and potentially damaging the engine. Also, the residual gases displace room for fresh air/fuel mixture and will thus reduce the power potential of each firing stroke.

Harry Ricardo was prominent in developing combustion chambers for diesel engines, the best known being the Ricardo Comet.