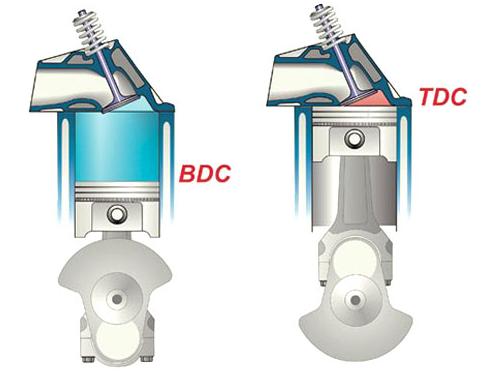 A high compression ratio is desirable because it allows an engine to extract more mechanical energy from a given mass of air-fuel mixture due to its higher thermal efficiency. This occurs because internal combustion engines are heat engines, and higher efficiency is created because higher compression ratios permit the same combustion temperature to be reached with less fuel, while giving a longer expansion cycle, creating more mechanical power output and lowering the exhaust temperature. It may be more helpful to think of it as an "expansion ratio", since more expansion reduces the temperature of the exhaust gases, and therefore the energy wasted to the atmosphere. Diesel engines actually have a higher peak combustion temperature than petrol engines, but the greater expansion means they reject less heat in their cooler exhaust.

Higher compression ratios will however make gasoline engines subject to engine knocking if lower octane-rated fuel is used, also known as detonation. This can reduce efficiency or damage the engine if knock sensors are not present to retard the timing. However, knock sensors have been a requirement of the OBD-II specification used in 1996 model year vehicles and newer.

On the other hand, Diesel engines operate on the principle of compression ignition, so that a fuel which resists autoignition will cause late ignition, which will also lead to engine knock.

The compression ratio in a gasoline or petrol-powered engine will usually not be much higher than 10:1 due to potential engine knocking (detonation). Some production automotive engines built for high performance from 1955–1972, with compression ratios as high as 13.0:1, could run safely on the high-octane leaded gasoline then available.

A technique used to prevent the onset of knock is the high "swirl" engine that forces the intake charge to adopt a very fast circular rotation in the cylinder during compression that provides quicker and more complete combustion. It is possible to manufacture gasoline engines with compression ratios of over 11:1 that can use 87 (MON + RON)/2 (octane rating) fuel with the addition of variable valve timing and knock sensors to delay ignition timing. Such engines may not produce their full rated power using 87 octane gasoline under all circumstances, due to the delayed ignition timing. Direct fuel injection, which can inject fuel only at the time of fuel ignition (similar to a diesel engine), is another recent development which also allows for higher compression ratios on gasoline engines.

The CR can be as high as 13:1 (2005 BMW K1200S) in engines with a 'ping' or 'knock' sensor and an electronic control unit. In 1981, Jaguar released a cylinder head that allowed up to 14:1 compression; but settled for 12.5:1 in production cars. The cylinder head design was known as the "May Fireball" head; it was developed by a Swiss engineer Michael May.

In a turbocharged or supercharged gasoline engine, the CR is customarily built at 10.5:1 or lower. This is due to the turbocharger/supercharger already having compressed the fuel/air mixture considerably before it enters the cylinders.

Motorcycle racing engines can use compression ratios as high as 14:1, and it is common to find motorcycles with compression ratios above 12.0:1 designed for 86 or 87 octane fuel. F1 engines come closer to 17:1, which is critical for maximizing volumetric/fuel efficiency at around 18000 RPM.

The CR may be higher in engines running exclusively on LPG or CNG, due to the higher octane rating of these fuels.

There is no electrical sparking plug in an auto-ignition diesel engine; the heat of compression raises the temperature of the mixture to its auto-ignition point. The CR will customarily exceed 14:1 and ratios over 22:1 are common. The appropriate compression ratio depends on the design of the cylinder head. The figure is usually between 14:1 and 16:1 for direct injection engines, and between 18:1 and 23:1 for indirect injection engines.

A compression ratio of 6.5 or lower is desired for operation on Kerosene.

Factors including late intake valve closure (relatively speaking for camshaft profiles outside of typical production-car range, but not necessarily into the realm of competition engines) can produce a misleadingly low figure from this test. Excessive connecting rod clearance, combined with extremely high oil pump output (rare but not impossible) can sling enough oil to coat the cylinder walls with sufficient oil to facilitate reasonable piston ring sealing. In engines with compromised ring seals, this can artificially give a misleadingly high compression figure.

This phenomenon can actually be used to some slight advantage. If a compression test does give a low figure, and it has been determined it is not due to intake valve closure/camshaft characteristics, then one can differentiate between the cause being valve/seat seal issues and ring seal by squirting engine oil into the spark plug orifice, in a quantity sufficient to disperse across the piston crown and the circumference of the top ring land, and thereby effect the mentioned seal. If a second compression test is performed shortly thereafter, and the new reading is much higher, it would be the ring seal that is problematic, whereas if the compression test pressure observed remains low, it is a valve sealing (or more rarely head gasket, or breakthrough piston or, rarer still, cylinder-wall damage) issue.

If there is a significant (greater than 10%) difference between cylinders, that may be an indication that valves or cylinder head gaskets are leaking, piston rings are worn, or that the block is cracked.

If a problem is suspected, then a more comprehensive test using a leak-down tester can locate the leak.

One exception is the experimental Saab Variable Compression engine (SVC). This engine, designed by Saab Automobile, uses a technique that dynamically alters the volume of the combustion chamber (Vc), which, via the above equation, changes the compression ratio (CR).

The calculated compression ratio, as given above, presumes that the cylinder is sealed at the bottom of the stroke, and that the volume compressed is the actual volume.

However: intake valve closure (sealing the cylinder) always takes place after BDC, which may cause some of the intake charge to be compressed backwards out of the cylinder by the rising piston at very low speeds; only the percentage of the stroke after intake valve closure is compressed. Intake port tuning and scavenging may allow a greater mass of charge (at a higher than atmospheric pressure) to be trapped in the cylinder than the static volume would suggest ( This "corrected" compression ratio is commonly called the "dynamic compression ratio".

The actual position of the piston can be determined by trigonometry, using the stroke length and the connecting rod length (measured between centers). The absolute cylinder pressure is the result of an exponent of the dynamic compression ratio. This exponent is a polytropic value for the ratio of variable heats for air and similar gases at the temperatures present. This compensates for the temperature rise caused by compression, as well as heat lost to the cylinder. Under ideal (adiabatic) conditions, the exponent would be 1.4, but a lower value, generally between 1.2 and 1.3 is used, since the amount of heat lost will vary among engines based on design, size and materials used, but provides useful results for purposes of comparison. For example, if the static compression ratio is 10:1, and the dynamic compression ratio is 7.5:1, a useful value for cylinder pressure would be (7.5)^1.3 × atmospheric pressure, or 13.7 bar. (× 14.7 psi at sea level = 201.8 psi. The pressure shown on a gauge would be the absolute pressure less atmospheric pressure, or 187.1 psi.)

Additionally, the cylinder pressure developed when an engine is running will be higher than that shown in a compression test for several reasons.