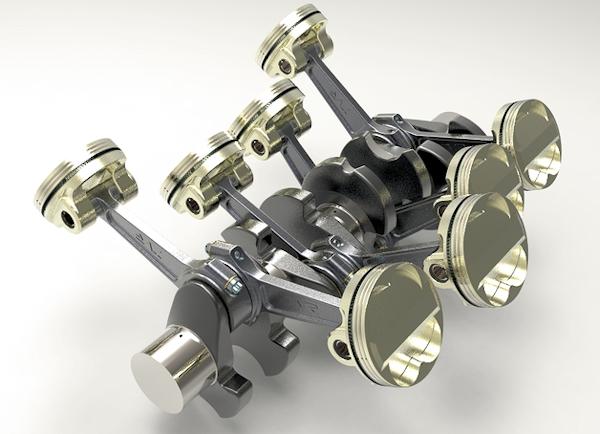 The crossplane crankshaft has four crankpins, each offset at 90° from the adjacent crankpins. The first and last of the four crank pins are at 180° with respect to each other as are the second and third, with each pair at 90° to the other, so that viewed from the end the crankshaft forms a cross. The crankpins are therefore in two planes crossed at 90°, hence the name crossplane. A crossplane crank may have up to five main bearings, and normally does, as well as large balancing weights. Crossplane V8 engines have uneven firing patterns within each cylinder bank, producing a distinctive burble in the exhaust note, but an even firing pattern overall. Their second-order balance means no additional balance shaft is necessary to achieve great smoothness.

The other design for a V8 crankshaft is the flatplane crankshaft, with all crankpins in the same plane and the only offset 180°. Early V8 engines, modern racing engines and some others used or use the flatplane crankshaft, which is similar to that used in a straight four or flat-four engine. Flatplane V8 engines may use any angle between the cylinder banks, with 60° and 90° the most common. They lack the V8 burble and the superior mechanical balance of the crossplane design, but do not require the large crankshaft balancing weights. Inherent balance of the big ends is like a straight four, and modern designs often incorporate a balance shaft for smoothness. But without balance shafts, flatplane designs have the least flywheel effect of any V8s, which allows them to be more free-revving.

Inline-4 engines can also use the crossplane concept. The 2009 Yamaha YZF-R1 motorcycle uses the crossplane crankshaft and utilises a specially designed balancer to counteract the unusual vibration found in this type of crank when not used in conjunction with a V8 engine.

This type of crank has been used in Yamaha's M1 MotoGP racing models in the past. Yamaha claims advances in metal forging technologies make this a practical consumer product.

Crossplane cranks can be combined with big-bang firing order for improved power delivery.

Twin-cylinder motorcycle engines can also use the crossplane concept. The Triumph Bonneville T100 and the 1991 Yamaha TDM 850 motorcycle use crossplane crankshafts with specially designed balancing systems. British twin motorcycles of the 1950 to 1980 era, and Yamaha 650 and 750 motorcycles of the late 60's through the early 80's, have been modified to use cross-plane crankshafts under the terms offset crankshaft or rephased crankshaft with notable success in eliminating the vibration inherent with a stock 360 degree vertical twin. These modified engines do not use additional balancing systems but produce an acceptably smoother engine with lighter flywheels and more torque than a stock engine.