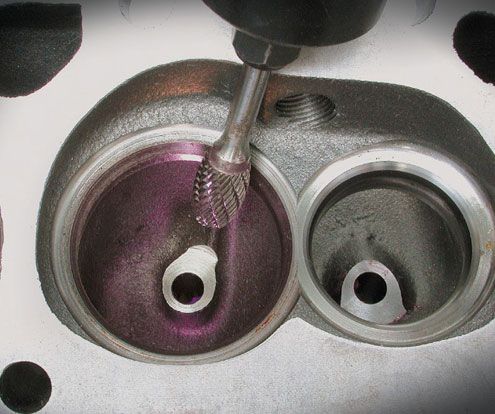 Cylinder head porting refers to the process of modifying the intake and exhaust ports of an internal combustion engine to improve the quality and quantity of the air flow. Cylinder heads, as manufactured, are usually suboptimal due to design and manufacturing constraints. Porting the heads provides the finely detailed attention required to bring the engine to the highest level of efficiency. More than any other single factor, the porting process is responsible for the high power output of modern engines.

Daily human experience with air gives the impression that air is light and nearly non-existent as we move slowly through it. However, an engine running at high speed experiences a totally different substance. In that context, air can be thought of as thick, sticky, elastic, gooey and heavy (see viscosity). Pumping it is a major problem for engines running at speed so head porting helps to alleviate this.

When a modification is decided upon through careful flow testing with an air flow bench, the original port wall material can be carefully reshaped by hand with die grinders or by numerically controlled milling machines. For major modifications the ports must be welded up or similarly built up to add material where none existed.

Considering the flow through the intake port as a whole, the greatest loss must be downstream of the valve due to the lack of pressure recovery (or diffusion). This loss is unavoidable on intake ports due to the nature of the poppet valve. On the exhaust ports the opposite condition exists and one can control the geometry down stream of the highest speed section, namely the valve seat. This allows the possibility of good pressure recovery and is the reason exhaust ports flow better than intake ports of equal size.

Accepting the expansion into the cylinder loss as unavoidable, the rest of the port becomes that much more important. The critical areas are those that pass the most air at the highest speed for the longest time.

The bowl area and the rest of the length of the port have important functions in controlling some of the dynamic behavior of the waves that traverse the system as well as setting up the air for a good entry to the throat. Shape, cross section, volume, cylinder swirl or tumble, and surface finish must be considered together with the overall design of the rest of the engine and vehicle to achieve good results.

The port is shaped to allow the maximum use of the available cross sectional area as the flow velocity should be optimized for the conditions the engine is expected to encounter. Well-shaped ports have few dead spots.

Some typical losses and their sources on a small block Chevrolet intake port.

7. Wall friction 4% * (For sand cast surfaces. This falls to 3% for smooth surfaces)

The "Porting and Polishing" myth

It is popularly held that enlarging the ports to the maximum possible size and applying a mirror finish is what porting is. However that is not so. Some ports may be enlarged to their maximum possible size (in keeping with the highest level of aerodynamic efficiency) but those engines are highly developed very high speed units where the actual size of the ports has become a restriction. Larger ports flow more fuel/air at higher RPM's but sacrifice torque at lower RPM's due to lower fuel/air velocity. A mirror finish of the port does not provide the increase that intuition suggests. In fact, within intake systems, the surface is usually deliberately textured to a degree of uniform roughness to encourage fuel deposited on the port walls to evaporate quickly. A rough surface on selected areas of the port may also alter flow by energizing the boundary layer, which can alter the flow path noticeably, possibly increasing flow. This is similar to what the dimples on a golf ball do. Flow bench testing shows that the difference between a mirror finished intake port and a rough textured port is typically less than 1%. The difference between a smooth to the touch port and an optically mirrored surface is not measurable by ordinary means. Exhaust ports may be smooth finished because of the dry gas flow and in the interest of minimizing exhaust by-product build-up. A 300 - 400 Grit finish followed by a light buff is generally accepted to be representative of a near optimal finish for exhaust gas ports.

The reason that polished ports are not advantageous from a flow standpoint is that at the interface between the metal wall and the air, the air speed is ZERO (see boundary layer and laminar flow). This is due to the wetting action of the air and indeed all fluids. The first layer of molecules adheres to the wall and does not move significantly. The rest of the flow field must shear past, which develops a velocity profile (or gradient) across the duct. For surface roughness to impact flow appreciably, the high spots must be high enough to protrude into the faster moving air toward the center. Only a very rough surface does this.

The internal aerodynamics involved in porting is counter-intuitive and complex. Successfully optimizing ports requires an air flow bench, a thorough knowledge of the principles involved, and engine simulation software.

Although a large portion of porting knowledge has been accumulated by individuals using "cut and try" methods over time, the tools and knowledge now exist to develop a porting design with a measure of certainty. Porting by inexperienced individuals without a full understanding of the fluid dynamics of the process still continues but the results are spotty and the process is expensive and time consuming with many more failures than successes